Skip to content
Who's in the Video
Barbara Oakley
Barbara Oakley, PhD, is a professor of engineering at Oakland University in Rochester, Michigan, and Ramón y Cajal Distinguished Scholar of Global Digital Learning at McMaster University. Her research involves[…]
Go to Profile
Videos
Is It Really Possible to Change Someone’s Beliefs?
Ideology doesn’t bend to reason, says Professor Barbara Oakley. Here's why we can't really change what other people believe, and why that brand of "helping" others can backfire.
▸
5 min
—
with
Barbara Oakley

The two things you simply cannot do are probably the two things you most want to: change someone, and help them. Barbara Oakley, an engineering professor who teaches the world’s largest online open class, knows this intimately: when she was teaching in China, “working with the communists” as she says, people had tried to warn others about the dangers of communist totalitarianism before the Great Leap Forward. Nobody listened. Ultimately discussion isn’t enough to sway people’s beliefs — for any slim shot at that, says Oakley, you have to give people new experiences, not just facts. But should you always be trying to change others, anyway? “Your own good intentions can also lead you astray,” says Oakley, whose research involves pathologies of altruism. Could altruism be a behavioral disorder? A study from Boston in the 1930s that was followed up in the 1970s imparts an important lesson on why thinking you know best for others can be anything but a help, and that if a good deed feels good, it might be a red flag that you’re only helping yourself. Barbara Oakley’s most recent book is Mindshift: Break Through Obstacles to Learning and Discover Your Hidden Potential, and you can find the Mindshift course here. 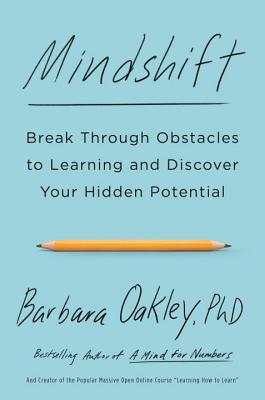 Barbara Oakley: It’s hard to know how you can change a person’s mind or opinion. And the reality is you can’t. I mean, a change has to come from within that person. And sometimes that change only comes when you have the experience or that person has the experiences themselves.

So again harking back to my old days of working with the communists. In Communist China there was some really, there were some horrific things taking place with Mao during the Great Leap Forward and the Cultural Revolution. But before that time even there were a lot of atrocities that didn’t get heard because if you talked about them they’d kill you. So in more open and western approaches to government, there was a lot of criticism of the bad things going on. And in communist systems there was none. And so it was easy to imagine that they were great systems.

So people who had come from the communist side in China and they were trying to convince others that wait a minute, no. You don’t want this type of totalitarian system in your life. You don’t want to bring it there. They would talk and talk and talk and it made no difference at all because the people couldn’t imagine what kind of experiences there were. It’s the same for the Jews during the Holocaust. I mean people just didn’t believe what was going on. So sometimes it’s just, it’s hard to imagine how you can change a person because you really can’t unless they’re experiencing the kinds of things that you’ve seen and you’ve encountered.

But at the same time it’s important to be aware that your own good intentions can also lead you astray. So what do I mean by that? There was a wonderful study done and published in the 1970s by Joan McCord. And what she did was she went back and looked at an old study in the 1930s of Boston school boys, 500 of them. They split them into two groups. One was the control group, they did nothing to them. The other group was given every possible advantage. They had counseling, summer camps, they got extra tutoring. Just medical assistance, even assistance for the family. It was really about the best you could imagine. Thirty years later Joan McCord followed up on those two groups. One group had significantly higher rates of suicide, alcoholism, drug use. They were in jail more. They ended up in lower class jobs. I mean it was just sort of every sort of bad thing you could imagine. They had significantly higher proportions of people who had this kind of thing happen to them. And which group was that? It was the group that got all the help. And what was interesting was that the people involved in the study were convinced that they were helping that group. But it backfired and it was only when they really went in and looked carefully at the data that they found that this wonderful helping was making the researchers and the participants feel very good. But it was actually harming the boys that they wanted to help.

So some of my research involves pathologies of altruism and that is sort of this road to hell is sometimes paved by good intentions. It’s very important to be aware that sometimes you can be totally convinced that you are helping and that what you’re doing is the right and good thing for others. And unless you’re willing to sort of let that stand up to scientific scrutiny you’d just be surprised at how you are sometimes incorrect and there are other ways to help that are maybe not so obvious and maybe don’t make you feel so good but actually that truly help.

Up Next
Your brain makes moral judgements—and it may be making mistakes
▸
5 min
—
with
Robert M Sapolsky
Related
3 steps to cure your money anxiety
We’re afraid to talk about money–and that costs us.
▸
7 min
—
with
Kathleen Burns Kingsbury
The Well
Tyler Cowen: America is at a critical point in history
“There’s a sense of crisis today that we did not have in the 1980’s or 90’s” — economist Tyler Cowen on progress in America.
▸
5 min
—
with
Tyler Cowen
How dirty debaters win against better opponents
How to defeat debaters who deal in distractions, according to a two-time world debate champion.
▸
5 min
—
with
Bo Seo
The mind-blowing stats on male inequality
Male inequality — the enormous cultural shift happening right under our nose.
▸
15 min
—
with
Richard Reeves
The Well
How Earth’s axis and rotation created human ritual
Why do so many cultures celebrate holidays at the same time of year?
▸
4 min
—
with
Sasha Sagan