The world’s wealthiest are prospering. As of February 2017, there were about 2,000 billionaires in the world. This micro-elite controls over US$7.6 trillion, an increase of 18 percent from 2016.

A billionaire’s spending power is difficult to grasp, both because most people do not correctly intuit large numbers, and because a billion dollars far outstrips most people’s experience.

What does a household budget look like to a billionaire? To find out, let’s scale down a billionaire’s income to $50,000, the median American income, adjusting budget items proportionally.

A year in the life of Joe Billionaire

To start, we need to estimate a billionaire’s annual income.

In the 30 years from 1987 to 2016, Bill and Melinda Gates amassed about $120 billion. This figure represents $80 billion in net worth and $40 billion controlled by their charitable foundation. The Gates’ average annual income for these years is $120 billion divided by 30, or $4 billion. (The Bill and Melinda Gates Foundation is a strategic partner of The Conversation US and provides funding for The Conversation internationally.)

According to Forbes, the wealth of Amazon CEO Jeff Bezos increased last year from $72.8 billion to $108.7 billion. Despite billion-dollar hiccups caused by daily stock price fluctuations, Bezos’ 2017 wealth increase was at least $32 billion, over $1,000 per second around the clock. 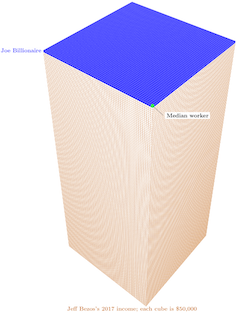 The Gates and Bezos are extremes. But what about a more typical billionaire’s income?

Let’s assume a new fortune has been acquired over about one decade. Since the median worth on Forbes’ list is about $2 billion, a ballpark estimate of annual income is one-tenth of this, or $200 million.

In absolute terms, $200 million per year is over $6 per second around the clock, equal to the global median annual income every eight minutes. Each year, Joe Billionaire amasses 4,000 median American incomes.

At this scale, a generous annual food budget comes to J$3. One year’s tuition at a prestigious university costs J$15. An extended stay in a top-quality hospital might run J$50. For J$150, Joe Billionaire can pick up a large middle-class home in most parts of the United States. If that’s too modest, a week’s income buys a mansion in Rancho Palos Verdes, California. Who needs student loans, health care and mortgages?

Joe Billionaire can and does purchase goods and services not available to the rest of us. J$2,500 builds a media mouthpiece. Comparable political donations may be followed by a Cabinet appointment.

Unlike a tithing purchase for you or me, a one-time J$5,000 donation for Joe Billionaire has no effect on spending power. We’re speaking of a scale where lavish living costs a few hundred Joe bucks. Next year will bring another J$50,000.

Ronald Reagan fomented outrage at one welfare recipient cheating the government of $8,000, or J$2. Unfortunately, we are not proportionally outraged by theft and losses dwarfing the human scale.

By comparison, the Reagan-era savings and loan scandal, the Enron scandal, the mortgage-backed securities crisis and the annual losses to offshore tax havens cost ordinary taxpayers hundreds of billions of dollars, tens of millions of times more than one welfare cheat. That’s enough to drain or break even Jeff Bezos’ bank.

We live in a world where two dozen of the wealthiest individuals could collectively fund health and science research for the United States, where any of the thousand billionaires could individually fund the NEA with no practical impact to their purchasing power. Participatory government may remain, but only the ultra-wealthy need apply.

Tags
capitalismeconomicsInequalityjeff bezosmarketsmoney
In this article
capitalismeconomicsInequalityjeff bezosmarketsmoney
Related
3 steps to cure your money anxiety
We’re afraid to talk about money–and that costs us.
▸
7 min
—
with
Kathleen Burns Kingsbury
The mind-blowing stats on male inequality
Male inequality — the enormous cultural shift happening right under our nose.
▸
15 min
—
with
Richard Reeves
The Past
How people crossed the Atlantic Ocean before commercial aviation
For centuries, the only way to travel between the Old and New World was through ships like the RMS Lusitania. Experiences varied wildly depending on your income.
The Past
How the crusades spawned the world’s first financial services company
The Knights Templar were not only skilled fighters, but also clever bankers who played a crucial role in the development of Europe’s financial systems.
The Present
To the moon? Five microeconomic lessons from Bitcoin
Bitcoin is often derided as volatile, but a new report suggests there is a method to the madness.
Up Next
Health
Does porn cause erectile dysfunction…or not?
While this has been a popular debate, the evidence suggests there isn’t a strong link between pornography use and erectile dysfunction (ED).