almost unique among US states, it was an independent republic for almost a decade before it joined the Union in 1845. (Tiny Vermont also was independent for more than a decade, and California too, if only for a mere month). Texas grade school students also daily pledge allegiance to the state flag, the recitation being: “Honor the Texas flag; I pledge allegiance to thee, Texas; One state under God; One and indivisible.” The first word spoken from the Moon on July 20, 1969 was “Houston”. The King Ranch in Texas is bigger than the entire state of Rhode Island. The dome of Texas’ state capitol in Austin is 7 ft. higher than the one in Washington DC.

No wonder the state tourism slogan is: “It’s like a whole other country”. Or that people from the Lone Star State like to state that “Everything’s bigger in Texas.” But apparently not big enough, according to this postcard map. A supersized Texas expands to fill out the central part of the US, leaving the other states diminished in size with rather disparaging alternate names:

The Great Lakes are ‘Few Puddles’. I’ve no idea what year this postcard map is from, but by the looks of it, it’s somewhere in the nineteen fifties.

The postcard was found here at www.cardcow.com. 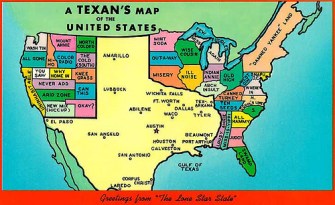 Related
Health
Could getting rid of old cells turn back the clock on aging?
More work is needed before declaring the technique a fountain of youth.
Thinking
Trimurti: Meet the “Holy Trinity” of Hinduism
Hinduism emphasizes the journey, whichever path that takes. And it holds us responsible for our own self-improvement.
The Past
Riddle solved: Why was Roman concrete so durable?
An unexpected ancient manufacturing strategy may hold the key to designing concrete that lasts for millennia.
13.8
Quantum superposition begs us to ask, “What is real?”
Quantum superposition challenges our notions of what is real.
Measuring Impact
15 research-backed benefits of employee training
The benefits of employee training are felt far and wide, from improvements in workers’ wellbeing to better customer interactions.
Up Next
Strange Maps
See Borneo Swallow the British Isles Whole
A curious map from Alfred Russel Wallace, the father of biogeography