Try as we might, humans often struggle to be the rational, unbiased creatures that we aspire to be. We routinely fall victim to cognitive biases, systemic errors in our thinking, and the glitches in our institutions that perpetuate them.

Justice is not blind to beauty

A large study examining crimes tried in courts noted that fines and bail levels tended to be greater for defendants rated as less attractive by observers. Another older study produced similar results for a variety of sentences, with better looking people serving less time. (However, the study did not find that they were convicted less overall.)

A number of studies using simulated juries suggests that this bias exists even when the crimes in question are not real. One simulation found that test subjects gave longer sentences to uglier people than to attractive ones for the same fictitious crime when given pictures to look at. Another found that test subjects were less certain of the guilt of attractive people.

Some of the studies into this phenomenon find similar effects for other non-relevant details about those accused of crimes. One found that smiling does wonders for people accused of crimes: they tend to get lower sentences than otherwise expected. Another found that the expression of remorse — which is often independent of the feeling — can seriously impact how a jury decides to act.

Because there is nothing new under the sun, this is not limited to modern America either. The ancient Greek story of Phryne the courtesan tells us that a Greek jury decided against finding her guilty of impiety on the grounds that a woman so beautiful must be in the good graces of the gods. 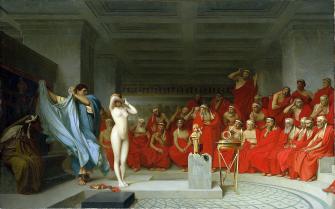 The good, the bad, and the ugly

In general, we seem to associate attractiveness with virtue. This “attractiveness bias” causes people to assume that more attractive people are smarter, saner, more sociable, and more competent than the ugly. Even babies seem to have this bias, being much more willing to pay attention to good looking people than others.

Studies also suggest — and this is not much of a surprise — that the attractive are more popular, make more money, and report less anxiety than others. The causes of these outcomes remain up for debate, though one can suppose that the aforementioned stereotypes likely make it easier for them to make friends and secure good jobs. The existence of this bias in hiring is well known and is considered a problem in some circles.

An interdisciplinary take on why we have this bias suggests that the explanation may be fairly simple: people act nicely to attractive people because we are attracted to them. They argue that the shift in behavior many people have in the presence of beautiful individuals is in line with the predictions of evolutionary psychology.

Is there a way to correct this bias?

Some studies suggest that the courtroom manifestation of the bias can be overcome by jurors and test subjects spending more time considering the problem of guilt, though others suggest this method may be inconsistent.

The beauty bias pops up everywhere. When it comes to hiring, several authorities suggest taking a standardized approach to dealing with people to assure that meaningful things, like qualifications and evidence, are highlighted while trivialities, like looks, are downplayed.

Humans unconsciously assume that good looking people are as great as they look. This bias is deeply ingrained and unlikely just to vanish. If you have a court date anytime soon, go dressed in your best attire. And if you are guilty, at least pretend to be sorry.

Tags
beautycriminal justicejustice systempsychologysociology
In this article
beautycriminal justicejustice systempsychologysociology
Related
The Learning Curve
No pain, no gain? Science debunks yet another exercise myth
You don’t have to “feel the burn” to see improvements to your health and well-being.
Sponsored
If we live in a capitalist world, why is it taboo to talk about money?
The “money taboo” is not a single taboo, but rather an amalgamation of several smaller taboos tied to gender and socioeconomic class.
Neuropsych
Need to find your focus? Take some time to lose it.
When you can’t enter flow, you can still lean on your internal rhythm.
3 steps to cure your money anxiety
We’re afraid to talk about money–and that costs us.
▸
7 min
—
with
Kathleen Burns Kingsbury
How dirty debaters win against better opponents
How to defeat debaters who deal in distractions, according to a two-time world debate champion.
▸
5 min
—
with
Bo Seo
Up Next
Health
A gruesome death: the macabre science of dehydration
You are only ever a few days away from your demise.