The brain continues to surprise us with its magnificent complexity. Groundbreaking research that combines neuroscience with math tells us that our brain creates neural structures with up to 11 dimensions when it processes information. By “dimensions,” they mean abstract mathematical spaces, not other physical realms. Still, the researchers “found a world that we had never imagined,” said Henry Markram, director of the Blue Brain Project, which made the discovery.

The goal of the Blue Brain Project, which is based in Switzerland, is to digitally create a “biologically detailed” simulation of the human brain. By creating digital brains with an “unprecedented” level of biological information, the scientists aim to advance our understanding of the incredibly intricate human brain, which has about 86 billion neurons.

To get a clearer vision of how such an immense network operates to form our thoughts and actions, the scientists employed supercomputers and a peculiar branch of math. The team based its current research on the digital model of the neocortex that it finished in 2015. They probed the way this digital neocortex responded by using the mathematical system of algebraic topology. It allowed them to determine that our brain constantly creates very intricate multi-dimensional geometrical shapes and spaces that look like “sandcastles”.

Without using algebraic topology, a branch of mathematics that describes systems with any number of dimensions, visualizing the multi-dimensional network was impossible.

Utilizing the novel mathematical approach, researchers were able to see the high degree of organization in what previously seemed like “chaotic” patterns of neurons.

“Algebraic topology is like a telescope and microscope at the same time. It can zoom into networks to find hidden structures—the trees in the forest—and see the empty spaces—the clearings—all at the same time,” stated the study’s author Kathryn Hess.

The scientists first carried out tests on the virtual brain tissue they created and then confirmed the results by doing the same experiments on real brain tissue from rats.

When stimulated, virtual neurons would form a clique, with each neuron connected to another in such a way that a specific geometric object would be formed. A large number of neurons would add more dimensions, which in some cases went up to 11. The structures would organize around a high-dimensional hole the researchers called a “cavity”. After the brain processed the information, the clique and cavity vanished. 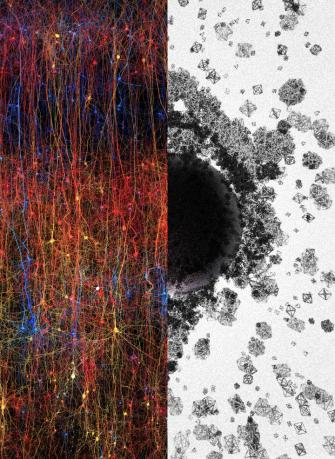 Left: digital copy of a part of the neocortex, the most evolved part of the brain. Right: shapes of different sizes and geometries that represent structures ranging from 1 dimension to 7 dimensions and more. The “black-hole” in the middle symbolizes a complex of multi-dimensional spaces aka cavities.

The researcher Ran Levi detailed how this process is working:

“The appearance of high-dimensional cavities when the brain is processing information means that the neurons in the network react to stimuli in an extremely organized manner. It is as if the brain reacts to a stimulus by building then razing a tower of multi-dimensional blocks, starting with rods (1D), then planks (2D), then cubes (3D), and then more complex geometries with 4D, 5D, etc. The progression of activity through the brain resembles a multi-dimensional sandcastle that materializes out of the sand and then disintegrates.”

The significance of the discovery lies in allowing us greater understanding into “one of the fundamental mysteries of neuroscience – the link between the structure of the brain and how it processes information,” elaborated Kathryn Hess in an interview with Newsweek.

The scientists look to use algebraic topography to study the role of “plasticity” which is the process of strengthening and weakening of neural connections when stimulated – a key component in how our brains learn. They see further application of their findings in studying human intelligence and formation of memories.

The research was published in the Frontiers in Computational Neuroscience.

Tags
braincutting edgedimensionsdiscoveryintelligencemathneuroscienceResearchsciencesupercomputer
In this article
braincutting edgedimensionsdiscoveryintelligencemathneuroscienceResearchsciencesupercomputer
Related
Neuropsych
How the brain transfers fear memories to long-term storage
Over time, different structures in the brain come to play unique roles in the storage and retrieval of long-term memories.
Neuropsych
Meet the neuroscientist who uses puzzles to help the brain heal after injury
Solving difficult visual puzzles seems to help the brain “rewire” itself by forming new neural pathways.
Neuropsych
Scientists discover a previously unknown part of the brain
The “subarachnoidal lymphatic-like membrane” helps shield and protect the brain.
Neuropsych
“Jumping genes”: A new model of Alzheimer’s
“Jumping genes” exist in various forms, including as remnants of ancient retroviruses, and make up about 45% of the human genome.
Neuropsych
About 1 in 100 people stutter. What causes it?
The majority of children who stutter will spontaneously recover from it without intervention, but some 20% of people do not.
Up Next
Personal Growth
Decline in Teen Mental Health Attributed to Late Night Stimulation
Over 1,100 teens in Australia exhibited low self-esteem and aggressive behavior linked to late-night phone and social media usage.