Few interstellar objects entice the imagination quite like black holes, massive objects with gravity so powerful nothing — not even light — can escape them. Once you go in, barring the existence of a wormhole to somewhere else, you are not coming back out. (For a scientific but fictional narrative of what it would be like to fall into a black hole, read this essay by Marcelo Gleiser.)

But now, a newstudy investigating the wild effects these objects have on magnetic fields and superheated gases has revealed the seemingly impossible: light from behind a black hole.

How to see a black hole

As you might expect from their primary claim to fame, it is difficult to directly observe black holes. The light that would typically be reflected off an object, allowing us to see it, simply falls into the hole.

However, Einstein told us that gravity works less like a giant vacuum cleaner sucking things toward large bodies and more like a heavy object placed on a rubber sheet. Gravity is the dip in the sheet near the object. Things moving past this dip, be it caused by a star or black hole, can pass by it without necessarily falling into it, though their paths will be altered.

Similarly, light — which consists of both visible and invisible portions of the electromagnetic spectrum — emitted by distant objects can be warped or bent slightly by large objects. This makes the object that emitted the light appear to be in a different place to an observer. This phenomenon, known as “gravitational lensing,” was used to validate elements of relativity a century ago: light from distant stars was bent when passing by the sun, just as Einstein predicted.

When astronomers examine black holes, they tend to take advantage of this warping. For instance, they look for distant light that is bent or focused by the black hole or to X-rays emitted from near the black hole (but far enough away not to fall in) to ascertain information about the black hole, such as its location.

This new study began in much the same way. A team of researchers was examining the coronas that form around black holes as material falls into them. This superheated material turns to plasma (ionized gas) as it falls in, though some of it is tossed about by the black hole’s spin and magnetic field. This turmoil continuously produces huge amounts of vibrant X-ray light around the hole, which can be observed to learn more about it. 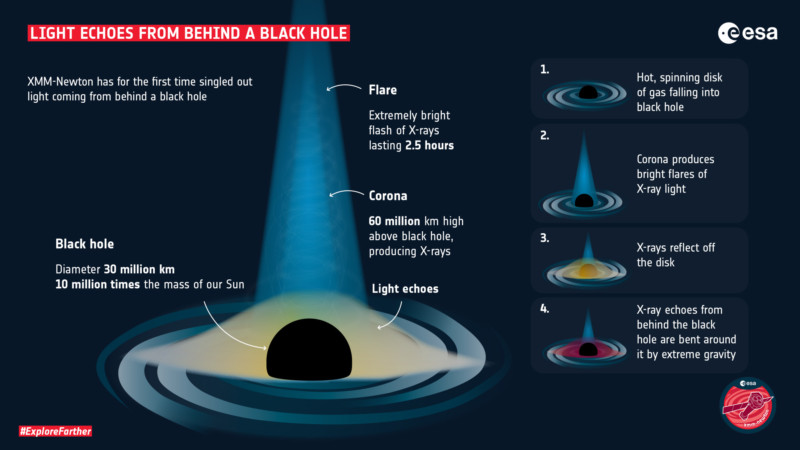 While observing the expected X-Rays, the researchers noticed something odd; smaller, strangely “colored” X-ray flashes. The flashes were in line with predictions that X-rays would be bent and reflected behind the black hole before becoming visible again as “echoes” of light.

As Stanford University astrophysicistDan Wilkins and study co-author explains, this was both a surprise and in line with theory:

“Any light that goes into that black hole doesn’t come out, so we shouldn’t be able to see anything that’s behind the black hole. The reason we can see that is because that black hole is warping space, bending light and twisting magnetic fields around itself.”

While relativity tells us that we should be able to see X-rays from behind a black hole because of its powerful gravity, this has never actually been seen before now. Study co-authorRoger Blandford of Stanford explained in apress release why finding it now is so exciting for those who have long worked on the problem:

“Fifty years ago, when astrophysicists starting [sic] speculating about how the magnetic field might behave close to a black hole, they had no idea that one day we might have the techniques to observe this directly and see Einstein’s general theory of relativity in action.”

The initial investigations into the coronas of black holes will continue, likely using more powerful X-ray telescopes as they become available. There are also plans for making a 3D model to map these findings. The theory of relativity likely will continue to prove its worth for the foreseeable future.

Tags
astronomycosmosphysicsSpace & Astrophysics
In this article
astronomycosmosphysicsSpace & Astrophysics
Related
Starts With A Bang
Meet TOI-700’s exoplanets: Our best bet for alien life
Red dwarf stars were supposed to be inhospitable. But TOI-700, now with at least two potentially habitable worlds, is quite the exception.
Starts With A Bang
JWST’s “most distant galaxies” might be fooling us all
JWST has seen more distant galaxies than any other observatory, ever. But many candidates for “most distant of all” are likely impostors.
Starts With A Bang
The Sun isn’t a typical star in the Universe
Most of us have heard that the Sun is an ordinary, typical, unremarkable star. But science shows we’re actually anything but average.
The Future
A far-out plan to build an asteroid city
The authors call it “wildly theoretical” — but let’s take a look, anyway.
Hard Science
The case for dark matter has strengthened
Though a single measurement is not enough to definitively decide the debate, this is a major win for dark matter proponents.
Up Next
Starts With A Bang
Astronomers Go Nuts For Closest Exoplanet Directly Imaged Ever: COCONUTS-2b
At 35 light-years away, it’s also the 2nd coolest, 2nd widest planet ever found.Despite discovering more than 4000 exoplanets, most remain obscure.Although more than 4,000 confirmed exoplanets are known, with more […]