Scientists are discovering all sorts of amazing history told by the meteorites found scattered across the Earth’s surface. Now a team led by Jean-Alix Barrat, a geochemist from the University of Western Brittany in France, have announced in a study that one such rock is apparently incredibly ancient, predating the Earth altogether. They believe it comes from a long-gone protoplanet, a baby planet that never got the chance to grow up, so to speak.

Its name is EC 002, and it may provide new insights into the early days of our solar system.

The study is published in the journal Proceedings of the National Academy of Sciences. 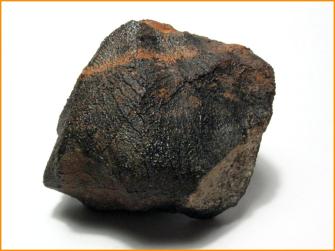 Erg Chech 002, or EC 002, was found in Adrar, Algeria last May in the nearly uninhabited Erg Chech region of the Sahara Desert. It was one of several chunks of meteorite discovered — together they weighed 32 kilograms (about 70 lbs). The Lunar and Planetary Institute describes EC 002 as being “relatively coarse grained, tan and beige appearance with sporadic larger green, yellow-green and less commonly yellow-brown crystals.”

A rough identification of EC002 classified it as an achondrite, which immediately differentiated it from most meteorites, which are chondritic.

Most of the meteorites found, about 95 percent, come from just two bodies out there in space, and about 75 percent may come from a single, large asteroid called 4 Vesta.

Here’s where we go from unusual to very unusual. Achondrites are usually basaltic, originating in a planetary body’s basaltic crust. EC 002 is not. It’s volcanic, a type of rock called andesite. The scientists have measured the radioactive isotopes of aluminum and magnesium it contains and concluded the minerals crystallized about 4.566 billion years back. Earth, by contrast, dates back only 4.54 billion years.

This chunk of cooled magma is a lonely survivor of that long-ago past. The authors write that “no asteroid shares the spectral features of EC 002, indicating that almost all of these bodies have disappeared, either because they went on to form the building blocks of larger bodies or planets or were simply destroyed.”

The andesite in EC 002 is interesting. On Earth, andesite’s sodium-rich-silicates are found in subduction zones where one tectonic plate sinks under another. (The basalt-like material in most chondrites forms when magnesium- and iron-rich lava cools.)

Still, EC 002 isn’t the first andesite meteor found, and a study of two of them (Graves Nunataks 06128 and 06129) discovered in Antarctica raises the possibility that they form from the melting of planetary bodies comprised of chondrites.

Some have theorized that if this is so, and since chondrites are so common, it could be that their melting into an andesite crust was a common occurrence during planetary formation. Indeed, Barratt’s study says, “It is reasonable to assume that many similar chondritic bodies accreted at the same time and were capped by the same type of primordial crust.”

It’s an interesting notion, albeit with two problems.

First, the light-reactive properties of EC 002 aren’t like anything else in the universe among the 10,000 objects in the Sloan Digital Sky Survey database.

Second, not that many andesite meteors have been found, making one wonder where they all might’ve gotten to. They might have gotten smashed up and broken apart. Or maybe they were subsumed in the formation of later planets. Like our Earth.

Tags
astronomymeteoritespaceSpace & Astrophysicsuniverse
In this article
astronomymeteoritespaceSpace & Astrophysicsuniverse
Related
Starts With A Bang
Meet TOI-700’s exoplanets: Our best bet for alien life
Red dwarf stars were supposed to be inhospitable. But TOI-700, now with at least two potentially habitable worlds, is quite the exception.
Starts With A Bang
JWST’s “most distant galaxies” might be fooling us all
JWST has seen more distant galaxies than any other observatory, ever. But many candidates for “most distant of all” are likely impostors.
Starts With A Bang
The Sun isn’t a typical star in the Universe
Most of us have heard that the Sun is an ordinary, typical, unremarkable star. But science shows we’re actually anything but average.
The Future
A far-out plan to build an asteroid city
The authors call it “wildly theoretical” — but let’s take a look, anyway.
Hard Science
The case for dark matter has strengthened
Though a single measurement is not enough to definitively decide the debate, this is a major win for dark matter proponents.
Up Next
Smart Skills
How to get materialism under control in your life
It’s insidious and destructive, but there are some things you can do to develop a healthier relationship with material things.