There are, indeed, other volcanoes erupting right now worldwide other than Chaiten. Of course, when you have an eruption like Chaiten going on, it is hard to pay attention to other eruptions. 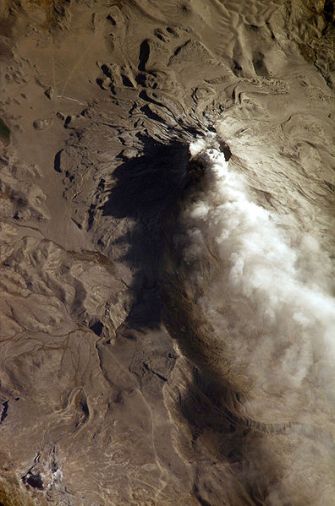 Ubinas, in Peru, has been having intermittent ash eruptions for the past few months, depositing ash on the surround communities. Apparently these eruptions have been causing some respiratory ailments to the local Peruvians due to the ash & volcanic gases. Ubinas is one of the most active volcanoes in Peru. This picture shows Ubinas erupting in 2006, as captured from the International Space Station (ISS).

Edit: Fixed “Ubinas is one of the most active volcanoes in Chile” to correctly say “Peru”. Yeah, I always seem to have Chile on the brain. Darn Aucanquilcha and Chaiten! Thanks Jon!

Related
Health
Could getting rid of old cells turn back the clock on aging?
More work is needed before declaring the technique a fountain of youth.
Thinking
Trimurti: Meet the “Holy Trinity” of Hinduism
Hinduism emphasizes the journey, whichever path that takes. And it holds us responsible for our own self-improvement.
The Past
Riddle solved: Why was Roman concrete so durable?
An unexpected ancient manufacturing strategy may hold the key to designing concrete that lasts for millennia.
13.8
Quantum superposition begs us to ask, “What is real?”
Quantum superposition challenges our notions of what is real.
Measuring Impact
15 research-backed benefits of employee training
The benefits of employee training are felt far and wide, from improvements in workers’ wellbeing to better customer interactions.
Up Next
Guest Thinkers
Chaiten Eruption, Day 7
nnAnother day, another development at Chaiten. Military stationed near the volcano helping with evacuations reported “booming noises” and saw incandescent blocks getting hurled from the vent area. This suggests that lava is […]