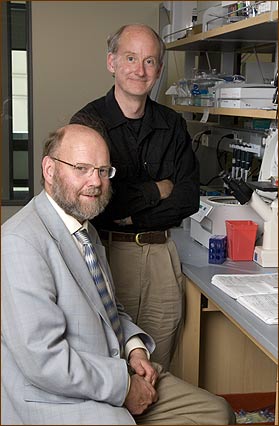 What happens politically when the two scientists most widely associated with therapeutic cloning and embryonic stem cell research appear to abandon cloning and embryo extraction for a procedure that involves non-controversial sources of pluripotent cells? It signals perhaps the end of a grand Congressional coalition that has put aside partisan differences to work in support of expanded funding for embryonic stem cell research. It also likely marks the end to the hyper-competitive race among states to fund their own research.

Today, the journals Science and Cell published the decade’s most significant breakthrough in stem cell research. James Thomson and colleagues at the University of Wisconsin and in Japan have reprogrammed human skin cells to create cells indistinguishable from embryonic stem cells. Here’s how the UWisc-Madison news release defines the implications:

The finding is not only a critical scientific accomplishment, but potentially remakes the tumultuous political and ethical landscape of stem cell biology as human embryos may no longer be needed to obtain the blank slate stem cells capable of becoming any of the 220 types of cells in the human body. Perfected, the new technique would bring stem cells within easy reach of many more scientists as they could be easily made in labs of moderate sophistication, and without the ethical and legal constraints that now hamper their use by scientists.

“It’s going to completely change the field,” says Thomson, the scientist who in 1998 isolated stem cells from human embryos for the first time. “They are probably more clinically relevant than embryonic stem cells,” he explains. “Immune rejection should not be a problem using these cells.”

Cloning pioneer Ian Wilmut adds a scientific and political exclamation point to the event with his announcement yesterday that he is pulling out of all therapeutic cloning research. At the time, Wilmut indirectly cited Thomson’s forthcoming study as making work with human eggs unnecessary. Today he told Bloomberg News that Thomson’s study “will revolutionize the way in which we study and treat human disease.”

The study by Thomson follows only a few days the publication of successful extraction of stem cells from cloned monkey embryos for the first time. Hailed as a landmark, news reports however emphasized the uncertainties and potential problems in using large numbers of female eggs in any human application of the procedure.

The Wisconsin skin cell discovery is perhaps as significant politically as it is scientifically. This event will no doubt add resonance to the powerful “middle way” frame offered by Presidential bioethics advisers such as William Hurlburt who argue that expanded funding for embryonic stem cell research is unnecessary because of the promise of non-controversial sources. Hurlburt uses the frame device of “moving forward with social consensus” and has amplified the resonance of his message with each successive study that has shown the potential to use adult cells to derive pluripotent-like stem cells.

Yet to date, no announcement has been as scientifically dramatic as this week’s. Thomson and Wilmut have moved on from the research that made them famous and have shifted focus to an area they consider more promising. “What a great bookend,” Thomson said in an interview for the Washington Post. “Ten years of turmoil and now this nice ending. I can relax now.”

However, major uncertainties remain and they mean that expanded funding for embryonic stem cell research is still needed. First is the problem of using retroviruses in the procedure which can catalyze cancer, a problem that Thomson, colleagues, and other experts are optimistic about overcoming. “Anyone who is going to suggest that this is just a side show and that it won’t work is wrong,” Doug Melton of Harvard University told the NY Times.

The second is that the stem cells derived from this new non-controversial procedure may not be as effective in generating therapies for certain diseases as those from embryos. Researchers will need to work with a mix of stem cell types to figure out which are best at generating effective therapies. In order to do that, they will require expanded funding for those derived from embryos. “”It’s not the time to abandon embryonic stem cell research,” Thomson is quoted as saying at a news conference.

However, despite this lingering need, this week’s discovery makes things politically ever more murky. The grand coalition of Republican and Democratic lawmakers that have come together at the Federal level to back expanded funding is now likely to be squeezed thin, with lawmakers on the edges of this coalition dropping away as it will be far less politically tenable for them to claim support now that there is such strong evidence in favor of the “middle way” framing of this policy problem. Says UWisc. bioethicist Alta Charo: “It’s going to fuel those who call for preferential federal funding only for non-embryonic stem cell research and it will certainly complicate any efforts to expand funding for embryonic stem cell research at the federal level.”

At the state level, in a time of tight budgets and a poor economy, convincing voters to back big state financing of embryonic stem cell research will be an ever harder and harder sell. Moreover, with stem cell research likely to be a second tier rallying issue for Democrats in 2008, this discovery might just take the topic off the table.

The stem cell controversy has moved into a major new stage in its’ life cycle and things are about to get very interesting.