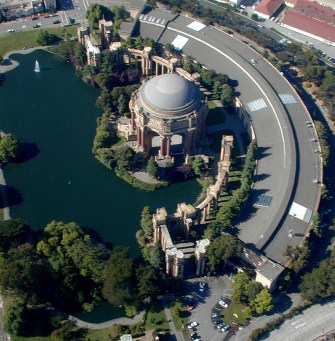 I’m back in DC after spending the previous two weeks in San Francisco as an Osher Fellow at The Exploratorium. It was my second visit this year to the world’s greatest science center. Each time I go out there I tell my friends that I feel like Tom Friedman in The World is Flat, trading ideas with really smart and innovative people. (I’m not the only one to offer high praise for The Explo, check out this rave from Jennifer Oullette at Cocktail Physics.)

During my two weeks, I held several brown bag lunch discussions with staff on topics including science and the media; the effective use of science blogs; and the many meanings and definitions of science literacy. We also discussed public forum and outreach activities on nanotechnology as well as an innovative Exporatorium project on communicating to the public the nature of scientific reasoning and evidence. (My official liaison for the two weeks was Mary Miller, who is the Project Director for their Public Understanding of Science programs. Read her blog post about my visit here.)

The Exploratorium is on the cutting edge of science communication, not only in their approach to their exhibits but also in their powerful and creative use of the Web. The constant interest and openness among the staff in figuring out effective ways to engage the public follows in the tradition of Exploratorium founder Frank Oppenheimer. In explaining his philosophy, Oppenheimer recognized the limitations of popular science media in reaching a wider public.

He believed that children and adults needed a social space to be able to explore and construct science on their own terms. (He even coined the term “adult play.”) His goal was not so much the transfer of knowledge, but rather fostering interest and curiosity as the foundation for life long informal learning.

Several of the Web projects currently under way reflect this philosophy. For example:

–>Last year the Explo commissioned a survey study by Pew on Internet use and science information. As someone who conducts research in the area, I consider it one of the best national survey studies to date. As I reported earlier this year, one of the key findings was that most science information use online is incidental. Given almost infinite options about where to surf on the internet, the strongest predictor of whether or not an individual used online science-related information was if they stumbled across it when actually looking for something else. Indeed, even among college-graduates, those most likely to use online science content were the already scientifically knowledgeable. The bottom line is that the availability of scientific information does not mean people will use it.

With this in mind, The Exploratorium is actively building new Web products and programs that sponsor incidental exposure and that reach beyond the small audience of science enthusiasts:

–>One new initiative is the Science of Sports, a Web section that explores the physics behind a Barry Bonds home run or the engineering that goes into a Tour de France race bike.

–>The Exploratorium has also launched a series of new blogs with ambitious plans to expand the prominence and variety of their blogs.

–>As part of the International Polar Year, the Exploratorium has trained scientists to use digital technology to create “scientist generated media.” These scientists use hand held video cameras to document their life and research in Antarctica. The Exploratorium will also be streaming live Web casts from the South Pole. At YouTube you can even watch a clip of what life is like at the South Pole Research Station.