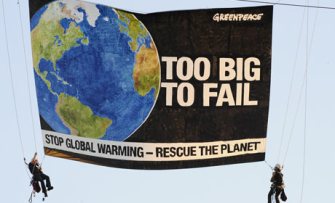 Americans under the age of 35 have grown up during an era of ever more certain climate science, increasing news attention, alarming entertainment portrayals, and growing environmental activism, yet on a number of key indicators, this demographic group remains less engaged on the issue than older Americans.

A survey report released today challenges conventional wisdom that younger Americans as a group are more concerned and active on the issue of climate change than their older counterparts. The analysis of nationally representative data collected in January of this year is timed for release with last night’s American University Forum event on the “Climate Change Generation: Youth, Media, and Politics in an Unsustainable World.”

—>Among the key findings, only 33% under the age of 35 trust the news media as a source of information on climate change, a proportion lower than any other age group. This proportion is also only slightly higher than the 27% of those under 35 who trust Sarah Palin as a source of information. This finding suggests that news organizations and journalists need to take initiatives to increase their credibility and to build stronger relationships with younger audiences.

—>Yet importantly, for those under 35, 82% of respondents trust scientists, 61% trust President Obama, and 54% trust Al Gore, proportions higher than any other age group. The implication is that direct engagement efforts on the part of scientists and the White House, outside of traditional news coverage, are likely to influence perceptions among this group.

—>Moreover, among Evangelicals under 35, for this politically important group, religious leaders are the most trusted source for info on climate change (81%) but nearly just as many young Evangelicals also trust scientists (77%) and a majority trust Obama (52%). If scientists and the White House were to work closely with Evangelical leaders on climate change, it would likely reap benefits relative to this sizable segment of Americans.

These are just a few of the important findings. Readers should check out the PDF of the full report and survey analysis. An executive summary is below. I will be posting about different elements of the report throughout the week so check back for more. The report is a joint collaboration between researchers at AU, Yale University, and George Mason University.

The Climate Change Generation?
Survey Analysis of the Perceptions and Beliefs of Young Americans

American adults under the age of 35 have come of age in the decades since the “discovery” of man-made climate change as a major societal problem. The oldest of this cohort was twelve in 1988, when NASA climate scientist James Hansen testified at a Senate Energy Committee hearing that global temperature rise was underway and that human-produced greenhouse gases were almost certainly responsible.

For this reason, the conventional wisdom holds that young Americans, growing up in a world of ever more certain scientific evidence, increasing news attention, alarming entertainment portrayals, and school-based curricula, should be more engaged with and concerned about the issue of climate change than older Americans.

However, contrary to this conventional wisdom, new nationally representative survey data analyzed by American Universityresearchers and collected by the Yale Project on Climate Change and the George Mason University Center for Climate Change Communication reveal that Americans between the ages of 18 and 34 are, for the most part, split on the issue of global warming and, on some indicators, relatively disengaged when compared to older generations.

Overall, the survey data, collected between December 24, 2009 and January 3, 2010, offer no predictable portrait of young people when it comes to global warming: While less concerned about and preoccupied with global warming than older generations, they are slightly more likely to believe that global warming is caused by human factors and that there is scientific consensus that it is occurring. They are also somewhat more optimistic than their elders about the effectiveness of taking action to reduce global warming.

And, while they are less open to new information about global warming than older generations, they are much more trusting of scientists and President Obama on the issue. However, they also share older generations’ distrust of the mainstream news media.

Of note, young evangelicals, an increasingly important group politically, place strong levels of trust in religious leaders as sources of information about global warming, though they are also trusting of scientists and President Obama.

Nationwide, liberals and conservatives exhibit wide differences in their beliefs about global warming, with conservatives more skeptical and less engaged than liberals, and this ideological divide is no different among young Americans.

Members of the current college-age generation (18-22 year-olds), who have grown up with even less scientific uncertainty about climate change, are somewhat more concerned and engaged than their slightly older 23-34 year-old counterparts; however, this does not hold across the board.

Still, the data suggest untapped potential to engage young Americans on the issue of global warming, particularly relative to shifting the perceptions of those who currently hold moderately skeptical or uncertain views.

Lauren Feldman, Ph.D. is Assistant Professor in the School of Communication at American University, Washington, D.C. Her research interests include political socialization, youth civic engagement, and the impact of entertainment and non-traditional news sources on political knowledge, attitudes, and participation. Her research has been supported by a grant from the Carnegie-Knight Task Force on Journalism and published in a number of edited volumes and peer-reviewed journals, including Communication Research, Political Communication, and Journalism: Theory, Practice, and Criticism. She earned her doctoral degree from the University of Pennsylvania’s Annenberg School for Communication.

Matthew C. Nisbet, Ph.D. is Assistant Professor in the School of Communication at American University, Washington, D.C. As a social scientist, he studies strategic communication in policymaking and public affairs, focusing on controversies surrounding science, the environment, and public health. The author of more than 30 journal articles and book chapters, his research on climate change communication is funded by the Robert Wood Johnson Foundation where he is a Health Policy Investigator. Nisbet serves on the editorial boards of the International Journal of Press/Politics and Science Communication. He also blogs about the intersections between science, the media, and politics at Framing Science (www.scienceblogs.com/framing-science).

Anthony Leiserowitz, Ph.D. is Director of the Yale Project on Climate Change at the Yale School of Forestry & Environmental Studies. He is an expert on American and international public opinion on global warming, including public perception of climate change risks, support and opposition for climate policies, and willingness to make individual behavioral change. His research investigates the psychological, cultural, political, and geographic factors that drive public environmental perception and behavior. He has served as a consultant to the John F. Kennedy School of Government (Harvard University), the United Nations Development Program, the Gallup World Poll, the Global Roundtable on Climate Change at the Earth Institute (Columbia University), and the World Economic Forum.

Edward Maibach, M.P.H., Ph.D., is a professor of communication and director of the Center for Climate Change Communication at George Mason University. With over 25 years of experience as a researcher and practitioner of public health communication and social marketing, Ed now focuses exclusively on how to mobilize populations to adopt behaviors and support public policies that reduce greenhouse gas emissions and help communities adapt to the unavoidable consequences of climate change. Ed previously had the pleasure to serve as Associate Director of the National Cancer Institute, as Worldwide Director of Social Marketing at Porter Novelli, as Chairman of the Board for Kidsave International, and in academic positions at George Washington University and Emory University. He earned his doctoral degree at Stanford University and his MPH at San Diego State University.

Related
Health
Could getting rid of old cells turn back the clock on aging?
More work is needed before declaring the technique a fountain of youth.
Thinking
Trimurti: Meet the “Holy Trinity” of Hinduism
Hinduism emphasizes the journey, whichever path that takes. And it holds us responsible for our own self-improvement.
The Past
Riddle solved: Why was Roman concrete so durable?
An unexpected ancient manufacturing strategy may hold the key to designing concrete that lasts for millennia.
13.8
Quantum superposition begs us to ask, “What is real?”
Quantum superposition challenges our notions of what is real.
Measuring Impact
15 research-backed benefits of employee training
The benefits of employee training are felt far and wide, from improvements in workers’ wellbeing to better customer interactions.
Up Next
Guest Thinkers
The Right Room for a Dialogue: New Policy on Anonymous Comments
I’ve long questioned the value of anonymous blogging or commenting. Much of the incivility online can be attributed to anonymity. And with a rare few exceptions, if you can’t participate […]