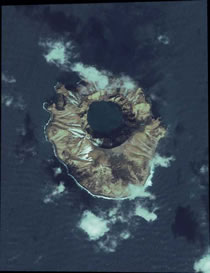 nnSorry about the lack of update. Having no internet while moving will do that! I did see an email this morning that had some interesting information about the amount of sulfur dioxide emitted by Kasatochi (Alaska) during the current eruption (thanks to Simon Carn, UMBC):n

“The August 7-8 eruption of Kasatochi volcano (Aleutian Islands)produced a very large stratospheric SO2 cloud – possibly the largest since the August 1991 eruption of Hudson (Chile). Preliminary SO2 mass calculations using Ozone Monitoring Instrument (OMI) data suggest a total SO2 burden of ~1.5 Tg. This figure will be revised in the coming weeks but is more likely to go up than down. The SO2 cloud has drifted over a large area of North America and is now (August 14) reaching Europe.“

nIt seems like Kasatochi has released quite a large flux of sulfur dioxide into the atmosphere. What effect this might have on climate is hard to tell, typically large SO2 fluxes will lower global temperature (or at least hemispheric temperature) by a fraction of a degree annually – which can actually still have a perceivable effect on weather. For those of you interested in where all the SO2 is in the atmosphere, try out this site run by NOAA that provides maps and predictions for SO2 movement.