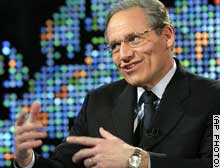 Everyone here in D.C. is talking about Bob Woodward’s State of Denial, as the book’s insider accounts continue to dominate the news cycle this week. Woodward’s impact offers a leading example of how politicians, journalists, and the general public use frames to cut down on complexity and uncertainty, and as tools to make sense of what’s either wrong or right in America. Yet in order to understand why Woodward’s book resonates so powerfully at this moment, you have to understand the history of the frame contest to define Bush.

State of Denial is a classic example of a “frame device,” a catchphrase or slogan that immediately connotes an underlying meaning. In American politics, we often reach decisions about what candidate to vote for, and then later how well that elected candidate is performing, by focusing relatively narrowly on the frame of “presidential leadership style and competency.”

As James Carville and Paul Begala detail in their latest book Take It Back, the Republican strategy in 2004 was not to campaign on the issues, but on candidate character. The goal was to define Bush early on as a strong and moral leader, and to define Kerry before he could define himself. In their campaign messages and advertising, the Bush team focused on a series of simple themes: “Steady versus changing with the political winds;” and “Strong and certain versus weak, waffling, and weird.” The master narrative about Kerry was that “He’s Not One of Us.”

Take a look at this analysis by the Wisconsin Advertising Project. Early in the campaign, the Bush team spent advertising time on defining the president as a strong leader in the wake of 9/11, BUT then in later months moved almost exclusively to attack ads with the goal of defining Kerry before he could define himself. (For examples of these ads, go through the progression of Bush ads as archived here at The Living Room Candidate.)

The Kerry team on the other hand foolishly believed the election would be decided by the issues, and focused on campaign messages that accented J-H-O-S: jobs, health care, and national security. As summarized by the Wisconsin Advertising Project analysis, they never went negative.

According to the GOP strategy, when it came to choosing a president, if he didn’t live your life, share your values, or was someone you would want to have a beer with, then he shouldn’t be your president. Bush would hammer home the preferred contrast with Kerry by repeating over and over again in speeches: “In the last four years, you and I have come to know each other. Even when we don’t agree, at least you know what I believe and where I stand.”

Democrats weren’t completely clueless when it came to attacking Bush’s leadership style. They did offer a focus on the president’s dogmatism and his refusal to acknowledge information that ran counter to his mindset, but these attacks were secondary messages, and had yet to resonate powerfully with events. Yet hurricane Katrina and its aftermath would change all that, serving as the major tipping point in the contest to frame Bush.

Here is how I break down the competing interpretations within the frame about Presidential Leadership Style and Competency as applied to Bush. From 2000 through the 2004 election, the Bush team was very good at keeping the two positive interpretations within this organizing device as dominant and in tune with new events. After Katrina, however, everything changed.

Pro-Bush argument A: Bush has strong convictions and beliefs, he is a strong leader, and does not back down from goals based on polls or when short-term trends do not go his way.

Pro-Bush argument B: Bush is the first “CEO president,” the “first president with a Harvard MBA,” smart enough to know that he needs to surround himself with really experienced, loyal people he can trust.

Anti-Bush argument A: Bush is a blind ideologue. He is willing to bend facts/data ideology. Even if new information suggests that his original decisions were wrong, Bush is unwilling to change his mind.

Anti-Bush argument B: A small group of like- minded ideologues protect him from new facts or input from other members of government that contradict his ideas or decisions.

Before and during the 2004 election, Democratic strategists did try to push the anti-Bush arguments, focusing on the frame device of “Bush in a Bubble.” Notice this Tom Tomorrow political cartoon from 2003, the cartoon from 2004 on Iraq, and this online spoof of Bush from 2004. 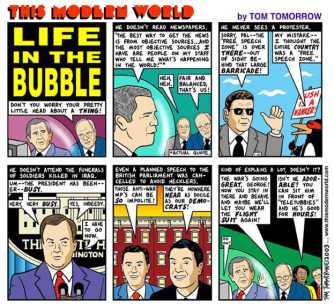 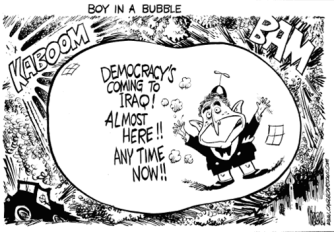 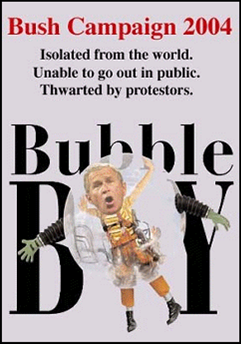 In the 2004 Presidential debates, when Kerry was asked to compare his leadership style to that of Bush, even Kerry tried to float the “dogmatic president” interpretation, yet it didn’t resonate outside his base. Here’s what Kerry said:

Yet post-Katrina, the administration’s perceived incompetence in responding to the events, and the contrasts between White House statements and the “facts on the ground” in New Orleans gave greater credibility to the attacks on Bush’s leadership style. This interpretation was crystallized in the much-talked-about Newsweek cover from the fall of 2005, featuring a cartoon of Bush floating in a bubble.

Since Katrina, others have tried to push the “Bush in a bubble” interpretation, hoping to make it the dominant frame in evaluating the troubles in Iraq. For example, last spring Sy Hersh in a New Yorker article made a minor splash when he reported that his sources in the Pentagon were telling him that Bush was completely cut off from reality, that his inner circle insulated the president from contradictory views, and that Bush had reached a state of “religious serenity.” A series of books released over the summer make a similar case, including the best-sellers The One Percent Doctrine, Hubris, Fiasco, and Cobra II.

But none of these books in their title focus on the underlying interpretation of leadership incompetence (Hubris and Fiasco come close), and none of these books were written by journalists who have either Woodward’s credibility or his potential for seismic media impact.

There are a lot of complex reasons why Iraq is a disaster, but Woodward’s book at 450 pages sums up very neatly in the title and advance publicity just one key dimension: the war is a failure because of gross incompetence on the part of the president and his staff, an incompetence fueled by a blind allegiance to ideology even in the face of counter-veiling information and advice.

And this interpretation, though offered for several years by the president’s opponents and in other books, resonates so powerfully now not only because of the credibility and influence of Woodward as messenger, but also because of its fit with a series of dramatic focusing events that all started with Katrina.