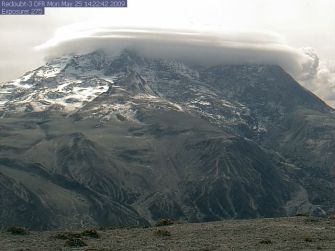 Lenticular clouds forming over Redoubt on May 25, 2009. Image courtesy of AVO/USGS and sent to me by Eruptions reader Todd Russell.

We haven’t talked much about Redoubt lately, so I thought I’d add a brief update. First off, the Alert Level at the volcano still sits at Orange/Watch status, meaning that although the volcano is not erupting, it could at almost any time.

Most of the threat of eruption stems from the ever-growing lava dome on the volcano. AVO noted today that the “Hut webcam views today show evidence of recent rockfall activity, including a fresh ash deposit to the east (left) of the lava dome and increased rock fall debris at the leading edge of the dome.” This might suggest that small explosions are accompanying these rock falls, or that the rock falls are generating ash plumes associated with block-and-ash flows as the dome rock crumbles due to gravity and oversteepening. However, if the dome were to have a catastrophic collapse (which is likely but not guaranteed), then a larger explosive eruption might occur when the pressure is released on the underlying magma. And thus, the watch goes on.

The uncertainty surround Redoubt hasn’t been all bad news for Alaska’s economy. Some business that usually see little work during the summer months have been able to retool for summer work thanks to Redoubt.