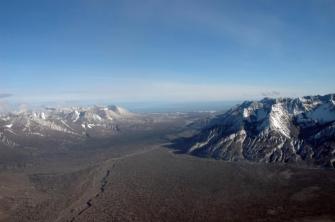 Following the provided script, Redoubt erupted again last night, producing a 32,000 foot / 10,000 meter ash column that prompted a new ash fall warning for the Kenai Peninsula area. Thus far, though, there have been few reports of major damage being caused by the ash fall. Alaska Air has yet to resume flights to Anchorage due to the ash, but will be reassessing as the day goes on. Since then, the seismicity has settled and we can wait for the next explosion. 2 PM Alaska time? Sounds good to me.

I want to point everyone to the great video montage created from the Hut webcam that Akira Shirakawa has posted for the 3/26 eruptions – again with the seismic record converted to sound. What is great is you can see the lahars coming down the volcano (bottom left and middle starting at ~1:00). There was a lot of cloudiness, but at the end you can see the results of the eruptions, including network of lahars that fill the valleys on the north flank starting from the Drift River glacier heading into the Drift River valley.

AVO has posted a lot of a new images, including two images of the eruption from space, one via a MODIS shot – in color – of the ash cloud mixed with other clouds and one via a weather satellite parked over equatorial Asia showing the ash column poking into the upper atmosphere. From earthbound observers (well, mostly if you include the Peninsula Airways pilot), they’ve added a multiple of ash cloud, volcano and regional damage shots including pictures of the ash coating the Crescent River valley (see above).