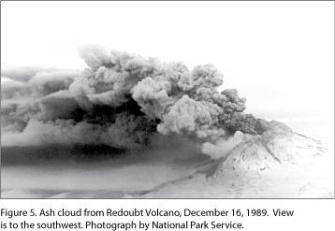 The Anchorage Daily News has a report that 16 Alaskan representatives got stuck in Anchorage after the eruption started. They were headed to Juneau to vote on Alaska accepting stimulus money (“volcano monitoring” anyone?), but they were on one of the many flights canceled by Alaska Airlines today due to the ash. ADN also have reports of an “ash out” in the coastal town of Skwentna.

AVO is currently reporting that ash doesn’t appear on the current radar maps in the Cook Inlet and there are no reports of new ash fall. This suggests that the ash is either staying below 13,000 feet / 4,000 meters or is too fine to appear on radar. Fine ash is less likely to fall out of the air quickly, so it can both travel far and be hard to detect – making it especially hazardous for aircraft. This is why VAAC warning for ash always err on the side of caution.

Still no visuals on the volcano, but an overflight might get some pictures if conditions go in AVO’s favor. Instead, I’ll post an image of how it likely looks if the eruption is similar to the 1989-90 eruption (see above).