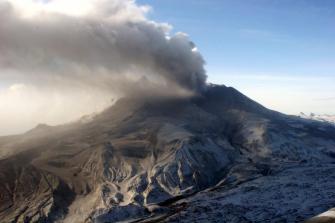 Today’s update will be relatively brief: AVO has returned Redoubt to Orange/Watch status after this weekend’s eruptions. The new dome continues to grow and this is accompanied by the usual volcanic seismicity associated with dome construction. We should expect to see the status fluctuate from Orange to Red as the eruption waxes and wanes – and likely get little to no warning of the next big explosive event.

The eruptions of Redoubt has forced Chevron to halt activity for all its Cook Inlet oil production – all 10 oil platforms – due to the indefinite closure of the Drift River Oil Terminal. We’ve been following the controversial terminal and the debate about its operation. The actual oil in the terminal has been loaded up to be moved, taking all but 2.5 million gallons of the 6.2 million gallons currently housed at the facility. Seawater will be used to fill the partially empty tanks to prevent them from “floating away” in the event of a large flood from the Drift River. This likely wraps up the Drift River Terminal saga until Redoubt settles to the point where Chevron and Coast Guard officials can considering reopening it.

And for those of you who want to see some great volcano eye candy, the Boston Globe (my hometown newspaper) has an excellent collection online.

Related
Health
Could getting rid of old cells turn back the clock on aging?
More work is needed before declaring the technique a fountain of youth.
Thinking
Trimurti: Meet the “Holy Trinity” of Hinduism
Hinduism emphasizes the journey, whichever path that takes. And it holds us responsible for our own self-improvement.
The Past
Riddle solved: Why was Roman concrete so durable?
An unexpected ancient manufacturing strategy may hold the key to designing concrete that lasts for millennia.
13.8
Quantum superposition begs us to ask, “What is real?”
Quantum superposition challenges our notions of what is real.
Measuring Impact
15 research-backed benefits of employee training
The benefits of employee training are felt far and wide, from improvements in workers’ wellbeing to better customer interactions.
Up Next
Guest Thinkers
The Decade Volcanoes
They might not truly be the “World’s Most Deadly Volcanoes”, but IAVCEI’s “Decade Volcanoes” are a list that shows just intertwined human society and volcanoes really are.