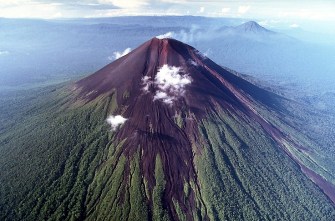 Ulawun Volcano, Papau New Guinea, one of the “Decade Volcanoes”

There was some discussion earlier about the so-called “Decade Volcanoes”, so I thought I’d elaborate a bit on them (doubly so in light of certain other lists.) These volcanoes are defined by IAVCEI – the International Association of Volcanology and the Chemistry of the Earth’s Interior – and are part of a program whose aim is

“to direct attention to a small number of selected, active volcanoes world-wide and to encourage the establishment of a range of research and public-awareness activities aimed at enhancing an understanding of the volcanoes and the hazards posed by them.”

More or less, it is a list of what could be considered the most hazardous volcanoes on the planet – at least in terms of hazards to people and property. The programs brings together geologists and government officials to research the volcanoes and better prepare for the next eruption. The USGS has a map showing were these volcanoes are located but I thought I’d list them here as well. Many are familiar names here on Eruptions, other are a little less prominent, at least in terms of recent activity. I’ve tried to link to any information I have on the volcanoes on the blog, but all of these are both fascinating and dangerous volcanoes.

(And if you’re curious what “decade” this refers to, its 1990-2000, the decade of “International Decade for Natural Disaster Reduction”. Maybe you missed between all the Nirvana, Macarena and Gen X, eh?)