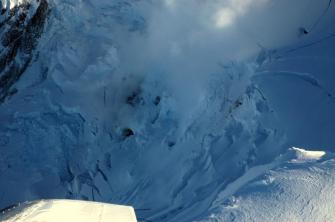 A week ago, if you asked around, I’m sure most people would have thought Redoubt would have erupted by now considering all the seismicity and melting that was seen at the end of last week. However, volcanology is not an exact science, and here we are continuing to watch Redoubt tease us with signs of pending activity. New holes have appeared in the snow that caps the volcano, the seismicity continues and the volcano is still spewing sulfur dioxide, carbon dioxide and hydrogen sulfide – all signs that magma is intruding the volcanic edifice. However, as on this morning (2/5/2009), the volcano has yet to erupt.

Some news from earlier in the week is that the US Air Force has moved many of its aircraft from the area of Redoubt to Washington state, apparently not wanting to play the waiting game like it did during the 1991 eruption of Pinatubo near Clark Air Base. Also, an eruption of Redoubt might also have a larger effect on air cargo rather than air passenger traffic, with one of the largest air cargo hubs located in Anchorage.