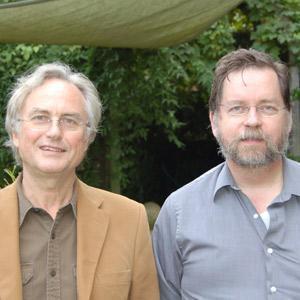 Myers with Richard Dawkins: Does his atheist punditry damage the scienceblogs.com brand?

Call me agnostic on the controversy that has erupted over the Catholic wafer incident in Florida. On the one hand I see the outcry from conservative groups as opportunistic and ridiculous. The reported death threats are outrageous, should be condemned by all parties, and prosecuted to the full extent of the law. The calls for expelling the student or the firing of PZ Myers are equally ridiculous.

Yet I also recognize that the Communion wafer has deep symbolic importance to the Catholic community and in that context many of the sharp emotional protests are not surprising.

As for the reaction to blogger PZ Myers commentary, it’s another example of the unintended consequences of his preferred brand of Don Imus atheism. Even fellow atheists and free speech advocates are troubled. Here’s what Andrew Sullivan has to say:

It is one thing to engage in free, if disrespectful, debate. It is another to repeatedly assault and ridicule and abuse something that is deeply sacred to a great many people. Calling the Holy Eucharist a “goddamned cracker” isn’t about free speech; it’s really about some baseline civility. Myers’ rant is the rant of an anti-Catholic bigot. And atheists and agnostics can be bigots too.

What alarms me the most about the incident, however, is the major perceptual hit that the scienceblogs.com community and brand continues to take because of PZ’s antics. The Seed sponsored blog portal is supposed to be a place that attracts new audiences to science, but in fact, it has turned into the Web’s leading echo chamber of anti-religious rants and sophomoric discussions of atheism, what the physicist Chad Orzel refers to as the “screechy monkey” problem.

In a recent interview on the podcast Point of Inquiry, host DJ Grothe asked PZ if he worried that scienceblogs.com was becoming better known as “atheistblogs.com.” It’s a question that merits serious consideration, especially in light of recent events.