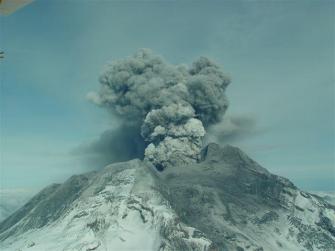 No, this isn’t Battlestar Galactica, but the same can be said for the Drift River Oil Terminal: this has all happened before and will all happen again.Coast Guard officials have (finally) decided to move ~6.3 million gallons of crude oil from the Chevron-owned Drift River Oil Terminal at the base of Redoubt. The oil terminal has been a flashpoint since Redoubt began to make noise earlier this year and even up until yesterday, it was unclear what, if any, action the Coast Guard might take with the facility. It had been shut down and evacuated since Redoubt began to erupt last week, but now the oil will be removed over the next few days (weather/volcano permitting).

It seems that the threat of dome collapse pyroclastic flows and the lahars/flood they might generate could have been the tipping point for the oil terminal. Even after the oil is moved, there will still be over 800,000 gallons of oil left in the tanks at the Terminal. The terminal was improved since the 1989-90 eruption of Redoubt, with the installation of dikes to protect it from potential floods and lahars that would travel down the Drift River valley from Redoubt – and so far, the dikes have withstood the floods of the 2009 eruptions. However, the public scrutiny and the uncertainty involved in, well, locating an oil terminal near an active volcano (see map above), has apparently forced the move. Groups near the Cook Inlet fear any breach of the dikes will spill millions of gallons of crude oil into the inlet, in a state that has already had to survive one major oil spill and is still recovering from that.

Hopefully, this will be the last time we have to deal with this issue at Redoubt. Either Chevron or the U.S. government should get the sense that keeping this terminal in operation is a detriment and a danger to both the ecology of Cook Inlet and the oil production in the region. However, I would also not be surprised if after Redoubt quiets after these eruptions, the oil returns and 10 years down the road we have to go down this road all over again. This problem won’t go away unless we make it go away.

Related
Health
Could getting rid of old cells turn back the clock on aging?
More work is needed before declaring the technique a fountain of youth.
Thinking
Trimurti: Meet the “Holy Trinity” of Hinduism
Hinduism emphasizes the journey, whichever path that takes. And it holds us responsible for our own self-improvement.
The Past
Riddle solved: Why was Roman concrete so durable?
An unexpected ancient manufacturing strategy may hold the key to designing concrete that lasts for millennia.
13.8
Quantum superposition begs us to ask, “What is real?”
Quantum superposition challenges our notions of what is real.
Measuring Impact
15 research-backed benefits of employee training
The benefits of employee training are felt far and wide, from improvements in workers’ wellbeing to better customer interactions.
Up Next
Guest Thinkers
Eruption at Yellowstone Lake
With Redoubt and Tongan eruptions in full swing, Yellowstone has decided to join the eruptive fun.