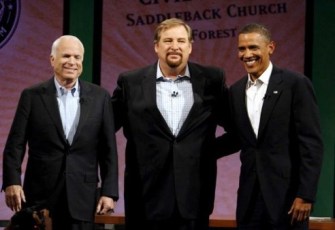 President-elect Obama’s remarks at a press conference today should sound familiar to readers of this blog:

“A couple of years ago I was invited to Rick Warren’s church to speak despite his awareness that I held views that were entirely contrary to his when it came to gay and lesbian rights, when it came to issues like abortion,” he said. “Nevertheless I had an opportunity to speak, and that dialogue I think is part of what my campaign’s been all about, that we’re not going to agree on every single issue, but what we have to do is to be able to create an atmosphere where we can disagree without being disagreeable, and then focus on those things that we hold in common as Americans.”

These talking points delivered to staff and spokespeople should also sound familiar:

The President-elect disagrees with Pastor Warren on issues that affect the LGBT community. They disagree on other issues as well. But what’s important is that they agree on many issues vital to the pursuit of social justice, including poverty relief and moving toward a sustainable planet; and they share a commitment to renewing America’s promise by expanding opportunity at home and restoring our moral leadership abroad.

As he’s said again and again, the President-elect is committed to bringing together all sides of the faith discussion in search of common ground. That’s the only way we’ll be able to unite this country with the resolve and common purpose necessary to solve the challenges we face.