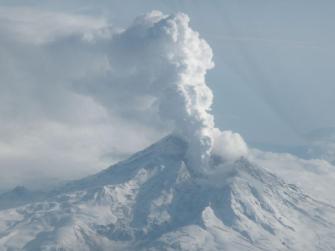 Redoubt with a prominent steam plume on April 7,2009. Image courtesy of Robert Cole/AVO

Eruptions reader Brian just pointed out that AVO has posted a new webcam (well, a redirectly webcam) for the volcano and I thought it deserved its own post. This new angle gets you right up to the new dome forming on the volcano. The Hut webcam is now zoomed into the area where new magma is extruding – mostly passively – from this eruption. From this vantage point, when conditions permit – you might be able to get a good view of the dome-collapse block & ash flows that typically accompany silicic dome growth on a steep-sided volcano like Redoubt. The actual new dome is the block, dark material at the top of the valley leading up the volcano. The volcano continues to steam away, producing the 10-15,000 foot / 3-4 km steam and ash plume – it remains at Orange/Watch status.