Hydrothermal fields are tricky beasts. They can wax and wane as the magmatic system heats and cools, as the water table rises and falls and as other events such as earthquakes or explosions might change the conduit systems. Changes are relatively common, as we’ve seen in recent events in the Yellowstone Basin and with the changes within the Waimangu Valley in New Zealand. Understanding the cause-and-effect relationships in these fields can be a challenge even to the most seasoned volcanologist.

Case in point is the new geyser that has appears on the Kamchatka Peninsula in Russia. Dubbed the “Prikolny Geyser” (more or less “Peculiar”), it was first noticed in the spring of 2009. The geyser is located 14 kilometers’ from Eurasia’s only geyser field,** the “Valley of Geysers” – the valley was inundated by a landslide in 2007 that covered almost half the geysers. The Prikolny Geyser appears to have a periodicity of ~6-20 minutes between eruptions, but oddly it seems that the geyser recycles the water it erupts (video link). It is unclear from the article exactly how we know that all the water is being recycled – you might expect that there should be some net loss during the eruption – but the geyser spouts the water 5 meters / ~15 feet, and then it all trickles back into the geyser to do it over again.

The Valley of Geysers and Prikolny Geyser are both located near the Uzon caldera (below), and this is likely the source of heat for the hydrothermal features. This caldera (along with the Geyzernaya Caldera) form a fairly sizeable one at 7×18 km depression and last erupted ~7700 years ago. This eruption wasn’t the caldera-forming eruption but rather some silicic domes and maars (volcanic crater formed by a phreatomagmatic – water-related – eruption). The caldera-forming eruption, however, was a big one, ejecting 20-25 km3 of pyroclastic material from the caldera. This eruption likely occurred somewhere around 39,000 years ago (or more recent). Periodic hydrothermal explosions occur in the depression as well, most recently in 1986. 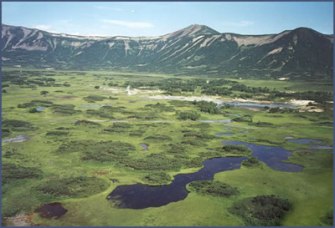 Concerning the new geyser, Valery Droznin of the Kronotsky Nature Reserve speculates that the geyser might be the result of an overactive hot spring, but why the hot spring might be pulsating to form the geyser is unknown. The geyser is being monitored by rangers in the Nature Reserve for temperature, periodicity and any changes that might occur. If you want to take a peek at the area, there is even a webcam for Prikolny GeyserValley of the Geysers. It will be interesting to see how long the geyser might last in this location and what it might say about any regional changes to the hydrothermal fields of the Uzon caldera.

**Note (July 10, 2009): Dr. Aldo Piombino pointed out to me that the Valley of Geysers is not the only geysers in Eurasia:

In Tuscany, there were geysers that now are used for geothermal power plants at Larderello, Tuscany (with others artificial holes). In some zones of the area (Sasso Pisano) there are still volcanic steams and hot waters with little geysers near the Etruscan termal area. Beneath Larderello there is a granodioritic pluton 3.5 MY old, wich is still hot because a thick shales level has not allowed thermal water-driven heat.

Thanks for the correction, Aldo!

Related
Health
Could getting rid of old cells turn back the clock on aging?
More work is needed before declaring the technique a fountain of youth.
Thinking
Trimurti: Meet the “Holy Trinity” of Hinduism
Hinduism emphasizes the journey, whichever path that takes. And it holds us responsible for our own self-improvement.
The Past
Riddle solved: Why was Roman concrete so durable?
An unexpected ancient manufacturing strategy may hold the key to designing concrete that lasts for millennia.
13.8
Quantum superposition begs us to ask, “What is real?”
Quantum superposition challenges our notions of what is real.
Measuring Impact
15 research-backed benefits of employee training
The benefits of employee training are felt far and wide, from improvements in workers’ wellbeing to better customer interactions.
Up Next
Guest Thinkers
Increasing concern about Mayon
The alert level hasn’t been changed, but increasing signs of activity at Mayon in the Philippines is cause for concern.