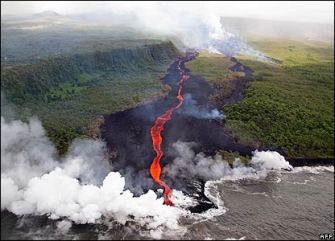 Piton de la Fournaise is a large shield volcano associated with the Reunion Island Hotspot. The volcano has frequent eruptions, mostly in the form of effusive lava flows of basalt, similar to the Hawaiian volcanoes. This could be an interesting new eruption because the initial eruptions suggest this is a flank eruption outside the caldera, but this might just be a product of a mistaken report.

*Update 9/21/08: Thanks to Anthony for noticing that Reunion Island is in the Indian Ocean, not the Pacific. Sorry about misplacing the island!

Related
Health
Could getting rid of old cells turn back the clock on aging?
More work is needed before declaring the technique a fountain of youth.
Thinking
Trimurti: Meet the “Holy Trinity” of Hinduism
Hinduism emphasizes the journey, whichever path that takes. And it holds us responsible for our own self-improvement.
The Past
Riddle solved: Why was Roman concrete so durable?
An unexpected ancient manufacturing strategy may hold the key to designing concrete that lasts for millennia.
13.8
Quantum superposition begs us to ask, “What is real?”
Quantum superposition challenges our notions of what is real.
Measuring Impact
15 research-backed benefits of employee training
The benefits of employee training are felt far and wide, from improvements in workers’ wellbeing to better customer interactions.
Up Next
Guest Thinkers
A new heating cycle for Ruapehu
Ruapehu is a noisy volcano, showing signs of eruptions on a yearly basis. It is also a potentially very hazardous volcano as it produces abundant lahars and has the capacity […]