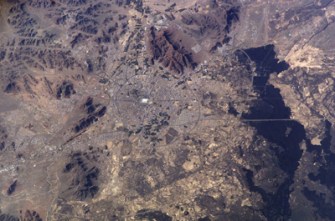 : The latest news suggests that there are little to no evidence of volcanic gases since Wednesday according to the SGS, but they continue to monitor.

Lava flows from a 1256 A.D. eruption near Medinah in Saudi Arabia (to the south of Harrat Lunayyir) taken by the crew of the ISS in 2004. It shows nicely the volcanic heritage (dark lava flow on right of image) in western Saudi Arabia. Image courtesy of JSC Earth Observation Lab.

Well, as the days go by, there are more and more indications that an eruption is about to occur in the Harrat Lunayyir region of Saudi Arabia. There is more confirmation in the press about “hot gasses” being released in the area near the epicenter(s) of the earthquakes and the seismicity is continuing – boths signs of magma moving towards the surface and degassing as it does. There are other confusing reports that mention things like “increased Radon” – which (a) I’m not entirely sure how they are measuring; (b) I’m not sure what it has to do with basaltic magmatism and (c) I think people are confusing with the controversy surrounding the Italian earthquake. Now over 2,000 people have been evacuated from the region near the earthquakes – and many of the quakes are still being felt far afield from the Al-Ais (Harrat Lunayyir) area.

If you find more news on the earthquakes and other signs of an impending eruption, please post them here!