Today looks to be a doubleheader of volcano news: 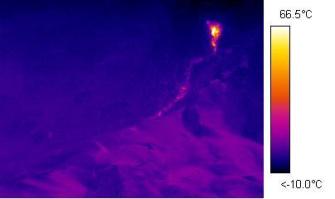 Image courtesy of AVO/USGS, taken by Rick Wessels. An infrared image of the north slope of Redoubt showing the hot, new dome material and hot block & ash flows confined to the valley.

At 11:30 AM yesterday, AVO put Redoubt back to Orange/Watch alert status after the volcano seem to settle down to small steam/ash plumes. Less than 12 hours later (at ~6:30 AM Alaska time), the volcano produced another large explosive eruption, sending an ash column up ~50,000 feet / 15 km and producing what seems to be a significant lahar that traveled down the Drift River valley. This new ash cloud headed to the SE of the volcano and apparently produced some lightning as well but no word on how it effected any air traffic. As some readers have mentioned, this large eruptive event likely rules out any chance of moving oil from the Drift River Oil Terminal – hopefully the terminal remains undamaged from the new flood/lahar that came down the river valley to the Inlet. You can see some of the effect of the eruptions (along with a healthy steam plume on the Hut webcam today, where the once white flank of the volcano is now dark grey with lahar deposits or ash. Redoubt, obviously, has been returned to Red/Warning status and this type of behavior from Redoubt should be expected as the new dome – the first bits imaged on Thursday using IR (see above) – grows over the coming weeks to months. 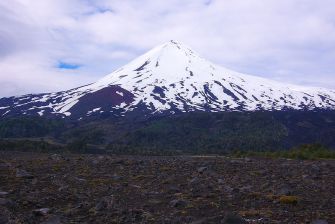 Down in southern Chile, Volcan Llaima has erupted a new >1,000 meter / 3,300 foot lava flow down its flanks. Chile’s Natonal Emergency Office reported explosions that sent volcanic debris 600 meters / 200 feet from the main vent and this new flow. At least 17 people are to be evacuated from the volcano. Llaima has been erupting intermittently producing explosive and effusive eruptions since January 2008.