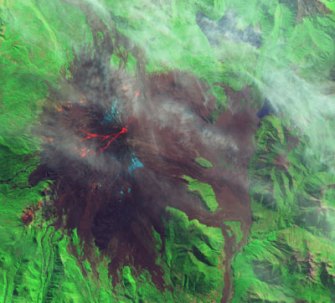 Llaima in Chile, taken on April 9, 2009. Image courtesy of the NASA Earth Observatory.

The NASA Earth Observatory (currently celebrating its 10th year) has posted a number of great images of the current eruption of Llaima in Chile, taken from Earth Observing-1 and Terra Satellites. They show both the ash plume of the eruption and the lava flows associated with it (above). The image here is a false-color image of Llaima, where the bright red/orange is the lava flow from the volcano, along with the dark brown of the ash/rocks from this and previous eruptions.

The eruption itself might continue to be hindered by a blocking of the vent from the tephra erupted so far, which as added 70 meters / 230 feet to the volcano’s height. This eruption has threatened paths, roads and waterways around the volcano (in spanish). Most appear to be OK so far, but Alejandro Vio of the SERNAGEOMIN warns that possible lahars might cause the most damage to infrastructure near the volcano. Authorities will also be bringing in 16 tons of food (in spanish) for domesticated animals that live near the volcano and are having their food source contaminated by the ash fall.

Related
Health
Could getting rid of old cells turn back the clock on aging?
More work is needed before declaring the technique a fountain of youth.
Thinking
Trimurti: Meet the “Holy Trinity” of Hinduism
Hinduism emphasizes the journey, whichever path that takes. And it holds us responsible for our own self-improvement.
The Past
Riddle solved: Why was Roman concrete so durable?
An unexpected ancient manufacturing strategy may hold the key to designing concrete that lasts for millennia.
13.8
Quantum superposition begs us to ask, “What is real?”
Quantum superposition challenges our notions of what is real.
Measuring Impact
15 research-backed benefits of employee training
The benefits of employee training are felt far and wide, from improvements in workers’ wellbeing to better customer interactions.
Up Next
Guest Thinkers
SI/USGS Weekly Volcano Activity Report for 4/1-7/2009
Get Google Earth placemarks for the Weekly Volcano Activity Report.