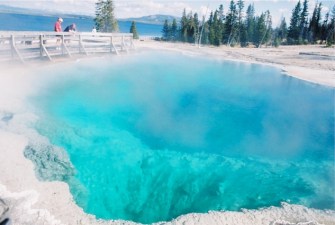 2008 is almost finished and we’ve seen one of the few high-silica rhyolite eruptions in the past 100 years at Chaiten in Chile. Chaiten was definitely not high on the list of potential locations for a rhyolite eruption worldwide. However, Yellowstone Caldera in Wyoming definitely is high of the list because it has erupted a lot of rhyolite over the last few 100,000 years (even discounting the big so-called “supervolcano” eruptions).

This is why the current news of an earthquake swarm at Yellowstone is, in the very least, really interesting. The earthquakes – over 250 of them – started yesterday and many of them were as high as magnitude 3.8 on the Richter Scale. The earthquakes are centered under Yellowstone Lake and the depth is poor constrained according to the USGS, but they appear to be shallow. Even Yellowstone expert Robert Smith (Univ. of Utah) say the swarm is “very unusual”. However, YVO plays down the event. The earthquakes might be related to hydrothermal fluids moving in the crust, they might be tectonic or they might be magma moving (but not to the surface). Definitely gives us something to keep an eye on as 2009 begins.

{Hat tip to reader Doug for pointing this out.}

Related
Health
Could getting rid of old cells turn back the clock on aging?
More work is needed before declaring the technique a fountain of youth.
Thinking
Trimurti: Meet the “Holy Trinity” of Hinduism
Hinduism emphasizes the journey, whichever path that takes. And it holds us responsible for our own self-improvement.
The Past
Riddle solved: Why was Roman concrete so durable?
An unexpected ancient manufacturing strategy may hold the key to designing concrete that lasts for millennia.
13.8
Quantum superposition begs us to ask, “What is real?”
Quantum superposition challenges our notions of what is real.
Measuring Impact
15 research-backed benefits of employee training
The benefits of employee training are felt far and wide, from improvements in workers’ wellbeing to better customer interactions.
Up Next
Guest Thinkers
The first stage of mitigation: education
nnWhen people think about volcanic mitigation, a lot of time is spent worrying about monitoring and science. There is nothing wrong with this as we need to know what the […]