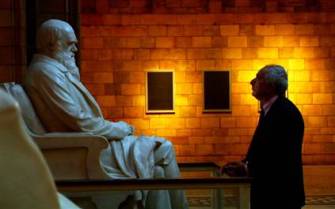 Two weeks ago, as Expelled premiered in more than a 1,000 theaters across the country, I went with several friends and graduate students for an early Friday evening screening at the Regal Cinema located in the Chinatown neighborhood of Washington, DC. The medium sized theater was about 80% full. In attendance was what appeared to be the typical urban professional crowd for the surrounding arts and entertainment district, an audience on a Sunday that is more likely to read the New York Times at a coffee house than to attend church.

As I watched the film, I noticed how effectively Expelled features several techniques common to political advertising. First, Stein relies heavily on the use of metaphor. For example, he bookends the film with historic footage of the Berlin Wall and a repetitive emphasis on freedom as a central American value. The sinister message is that “Darwinism” has led to atheism, fascism, and communism. As a corollary, if Americans can join Stein in tearing down the wall of censorship in science it would open the way to religious freedom and cultural renewal.

Like many political ads, Expelled also strategically employs emotion while playing on low levels of knowledge among movie-going audiences. For example, early in the film, Stein misleadingly defines celebrity atheists such as Richard Dawkins, PZ Myers, Daniel Dennett, and Christopher Hitchens as the representatives of “establishment science.” The implication is that in order to leave room for God in society, intelligent design needs to be taken seriously.

Yet in playing on audience emotion, what Expelled conveniently avoids are interviews with any of the many religious scientists in the United States. In fact, several of these religious scientists are far more representative of the American scientific establishment than the blogger Myers, the journalist Hitchens, the philosopher Dennett, or the British author Dawkins.

Consider that Stein could have interviewed Francis Collins, director of the Human Genome Project, who recently declared: “For me, as a scientist who is also a religious believer, research activities that look like science can also be thought of as opportunities to worship.” Alternatively, Stein could have turned to Francisco Ayala, past president of the American Association for the Advancement of Science, formerly a Catholic priest, and author of Darwin’s Gift to Science and Religion.

Yet absent this context, the audience is led to believe that all scientists are angry atheists, and that in contrast, Stein is a likable and comedic champion.

In the screening I attended, somewhat predictably, there were chuckles and positive laughter in reaction to Stein while there was audibly negative emotion directed at the comments of the interviewed scientists. As the film credits rolled at the end, there was even a strong round of approving applause!

There is no way to tell how nationally representative this opening night audience might have been. At various other locations across the country, several bloggers and colleagues have reported that they were the only person in the theater for a Sunday matinee or a weekday evening show. One thing, however, is for sure: By documentary box office standards, Expelled has made its mark.

As the figures below show (source), with $5.3 million earned, Stein’s propaganda film already ranks as the seventh top grossing public affairs documentary of all time and is likely to end its run at # 6.

Some bloggers have speculated that in light of Expelled’s marketing budget, the documentary will still fail to make a profit. Yet it is unlikely that profit was the driving motive for the film’s financial backers.

Stein’s film was bankrolled by Walt Ruloff, a Christian evangelical millionaire. And Expelled’s appearance in more than a 1000 theaters, a record for a documentary debut, depended heavily on the sponsorship of the Regal Cinemas chain, which is owned by the Christian conservative Phil Anschutz.

Instead of dollars, what ultimately likely matters to these right-wing philanthropists is the impact on the policy debate. Expelled’s influence stretches well beyond the theater and any direct impact on audiences. As I review in this recent report to the Ford Foundation, these impacts can be tracked across several different dimensions.

For example, although many film critics have savaged the documentary, Stein’s arguments have received either uncritical or positive coverage by way of soft news features, op-eds, and columns at daily newspapers, in reviews at Christian or conservative Web sites, in appearances on CNN with Wolf Blitzer, ABC’s Jimmy Kimmel Live, and by way of strong endorsements on conservative talk radio and cable news programs such as Rush Limbaugh and Fox News’ Hannity & Colmes. Advertisements for Expelled have also run on CNN, Comedy Central, and talk radio stations.

Perhaps most troubling have been the advanced screenings for policymakers, interest groups, and other influentials. For example, Expelled’s producers have previewed the film for both the Missouri and the Florida state legislatures, connecting the film’s message to a proposed “Academic Freedom Act” in each state that would encourage teachers to discuss the alleged flaws in evolutionary science. As Stein framed the matter at the screening in Florida: “This bill is not about teaching intelligent design. It’s about free speech.”

With each of these dozens of screenings there has likely been a strong intensification of commitment and emotion among the conservative activist base in attendance along with advocacy training, the raising of money, and the distribution of other resources such as videos and literature. In particular, Expelled provides these activists with an increased repertoire of arguments, talking points, and examples to use with neighbors and friends.

There is even the possibility that the screenings helped anti-evolution groups link up with new conservative coalition partners not previously involved on the issue. For example, Stein has shown Expelled at several meetings and venues here in Washington, DC, including a special screening for Congressional staffers.

When the film moves to DVD distribution, expect more of these types of Expelled screenings, house parties, and church gatherings across the country, all aimed at mobilizing a political movement in favor of anti-evolution bills. As Reason magazine’s Ronald Bailey reports, at a April 15 press conference at the conservative Heritage Foundation, Expelled’s financial backer Walt Ruloff said that as many as 26 states had been targeted this year with so-called “freedom bills.”

Related
Health
Could getting rid of old cells turn back the clock on aging?
More work is needed before declaring the technique a fountain of youth.
Thinking
Trimurti: Meet the “Holy Trinity” of Hinduism
Hinduism emphasizes the journey, whichever path that takes. And it holds us responsible for our own self-improvement.
The Past
Riddle solved: Why was Roman concrete so durable?
An unexpected ancient manufacturing strategy may hold the key to designing concrete that lasts for millennia.
13.8
Quantum superposition begs us to ask, “What is real?”
Quantum superposition challenges our notions of what is real.
Measuring Impact
15 research-backed benefits of employee training
The benefits of employee training are felt far and wide, from improvements in workers’ wellbeing to better customer interactions.
Up Next
Guest Thinkers
Is This Hillary Ad Really So Negative?
In the wake of Clinton’s victory in Pennsylvania, the NY Times editorialized that Hillary’s campaign team had taken “the low road to victory.” According to the Times, one particular ad […]