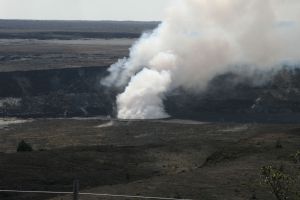 Many times people think that volcanic eruptions affect the economy through the destruction inflicted upon the landscape during an eruption: lahars and pyroclastic flows destroying bridges and homes, ash ruining crops and water, lava flows overunning communities. However, in Hawai’i, a new effect of volcanism has been seen in the agriculture of the state. The volcanic fog – or “vog” as its called – has been causing major problems with farms on the Big Island of Hawai’i. Since the new activity at Halemaumau (see above) began last year, Kilaeua has been spewing much larger volumes (2-4 times more) of volcanic gases such as sulfur dioxide, carbon dioxide, water and carbon monoxide than in previous years. These gases form a brown fog that is caustic to most animals and plants. The sulfur dioxide, in particular, has caused many crops to fail thanks to the production of sulfuric acid with the sulfur dioxide interacts with water – think of it as a very concentrated version of “acid rain” that is seen in the eastern United States.

The solution to this would either be to build “vog-proof” air-filtering greenhouses or planting a limited set of plants that seem to withstand the effects of the vog. Alternately, one can hope that the gas emissions from Kilaeau will return to lower levels, allowing for the plants to survive. In any of these cases, the growers on the island face a large financial hardship in order to keep their businesses alive in the face of the volcano. This passive destruction of plants by Kilaeua shows how even when a volcano seems to be benign, it can inflict millions of dollars of damage on the local economy.