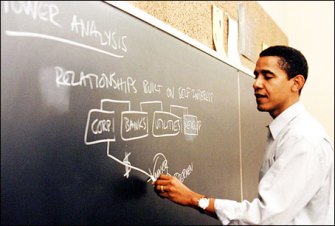 From the Chronicle of Higher Education:

The 2008 presidential election has broken so many political barriers that historians may overlook one unusual fact: When Barack Obama takes the oath of office next January alongside his running mate, Joe Biden, it will be the first time in history that the president, vice president, and both of their spouses have worked in higher education.

Taken together, the Obamas and the Bidens have amassed decades of experience at colleges and universities. Mr. Obama taught constitutional law at the University of Chicago Law School from 1992 until 2004, when he took office in the U.S. Senate. His wife, Michelle, has worked in the administration at the same university and is on leave from her job as vice president for community and external affairs at the University of Chicago Hospitals.

The Bidens also have spent considerable time in academe. For the past 17 years, Mr. Biden has taught as an adjunct professor at the Widener University School of Law. His wife, Jill, is an English instructor at Delaware Technical and Community College’s Stanton-Wilmington campus.