I have finally gotten together enough to create a Google Earth image (below) of the location of the Saudi Arabian earthquakes and their depths/magnitudes. I only have the data from the USGS earthquake list, but it is very illuminating: 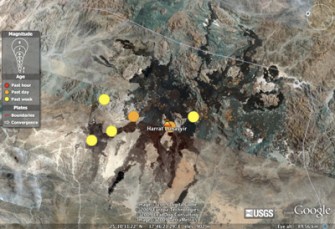 Harrat Lunayyir volcano in western Saudi Arabia from Google Earth with the current earthquakes shown on the image. Image courtesy of Google, earthquake data from the USGS. Click here to see a larger version.

The earthquakes look like this (all times are Universal Time):

There are likely a bunch of smaller events going on as well, but this is all the data I have on hand. Overall, the depth over the last few days doesn’t seem to be significantly changing (within the error of the depth estimates). I’m still not sure how this shows that magma is moving (according to some of the early quotes from Saudi Arabian officials)

: Just as I posted this, I saw this: Saudi Arabian officials have extended the emergency zone out 40 km from the earthquakes. No clear indication whether they are doing this out of fear of the seismicity or potential volcanic activity, but it definitely shows increasing concern.

Harrat Lunayyir is a lava field about which we honestly don’t know too much. It is relatively small compared to other lava fields in western Saudi Arabia, but some flows made it to the Red Sea, a distance of 50 km / 35 miles! In terms of previous eruptions, the only datum is a potential eruption around 1000 A.D., but beyond that, not too much. If you look at the image (above), you can see the dark black basaltic (or basanite) lava flows. You can also see the image is pockmocked with reddish dots – these are oxidized cinder cones, a very common feature of lava fields.

The fact that these earthquakes all seem to be centered under a known lava field should be a sign of concern. Without confirmation of some of the eyewitness accounts, there is still a chance that these might not be related to the lava field, but until we can get more information, we’re still left to speculate.