The weekend is rolling in and I might end up spending most of it in the 90+ degree California weather, so unless something big comes up (volcanically), I’ll leave you with a few news bits. 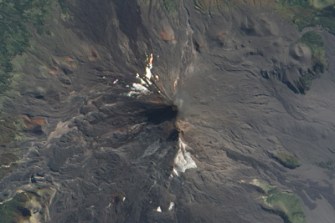 Llaima in April 2009. Image courtesy of the NASA Earth Observatory

This is a true color image of Llaima in Chile, provided by the great folks at the NASA Earth Observatory. You can clearly see the dark grey new tephra on the main summit cone along with the grey ash covering the snow on the southwestern part of the volcano (north is up). A few other fun features are some smaller parasitic cones in the upper northeastern quadrant of the photo and just some of the gorgeous dark lava flows with steep fronts in the southeast and western side of the volcano. Every time I see one of these satellite images of volcanoes I wonder how we ever worked without them. The SERNAGEOMIN is keeping Llaima at Red Alert (in spanish) for the time being.

Fairly quiet on the Redoubt front, but there has been a lot of news about the lightning observations in the volcanic ash plume from Redoubt. I have to admit, I don’t know much about this line of research, but lightning in volcanic ash plumes is relatively common. Luckily, Redoubt was so closely monitoring that researchers were able to capture a lot of images/data on the lighting during its eruption.

And I’ll leave you with some video of Strombolian activity at Yasur in Vanuatu. The folks who took this video got right up close to the erupting vent, so its fairly impressive footage (minus the throbbling techno beats). Yasur is almost constantly erupting, with the small Strombolian eruptions.