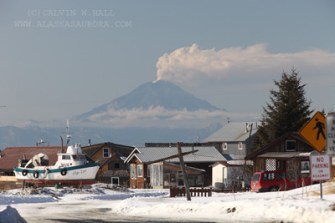 It has been a few days since we’ve talked about Redoubt. Well, it might be because the volcano has settled down for the past week, to the point that AVO put the volcano back to Orange/Watch status last week and hasn’t had to go back to Red/Warning since. This is not to say the Redoubt is quiet, on the contrary, there is still elevated seismicity, an almost-constant steam/ash plume up to 15,000 feet / 5,000 meters and most importantly, the new dome (below) is still growing near the summit. The system has been actively degassing carbon dioxide and sulfur dioxide at much as 10,000 tons/day and the USGS is quoted as saying that

“…these volcanic gas emission rates are among the largest ever measured in Alaska, though such high values are consistent with an openly degassing volcanic system that is actively extruding lava.” 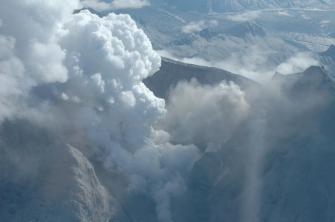 The area of active dome growth on Mt. Redoubt. Image courtesy of AVO/USGS by Heather Bleick. Taken on April 5th, 2009.

Right now, the big concern with residents around the volcano will be how Redoubt might impact the upcoming tourist season in the Cook Inlet area. New explosions and eruptions might disrupt air travel to the area enough to affect the salmon fishing season in Alaska negatively. And, of course, we have the ongoing saga of the Drift River Oil Terminal. The shutdown of the terminal has derailed oil production in the Inlet and there is even talk of a permanent shutdown of the terminal. These two major economic resources for Alaska – tourism and oil – will be the stories to follow as Redoubt continues to rumble.

Related
Health
Could getting rid of old cells turn back the clock on aging?
More work is needed before declaring the technique a fountain of youth.
Thinking
Trimurti: Meet the “Holy Trinity” of Hinduism
Hinduism emphasizes the journey, whichever path that takes. And it holds us responsible for our own self-improvement.
The Past
Riddle solved: Why was Roman concrete so durable?
An unexpected ancient manufacturing strategy may hold the key to designing concrete that lasts for millennia.
13.8
Quantum superposition begs us to ask, “What is real?”
Quantum superposition challenges our notions of what is real.
Measuring Impact
15 research-backed benefits of employee training
The benefits of employee training are felt far and wide, from improvements in workers’ wellbeing to better customer interactions.
Up Next
Guest Thinkers
SI/USGS Weekly Volcano Activity Report for 4/1-7/2009
Get Google Earth placemarks for the Weekly Volcano Activity Report.