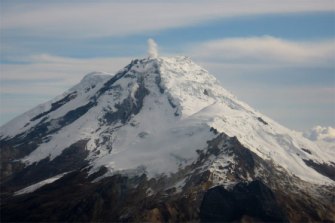 Bored with waiting for Redoubt to erupt? Well, Nevado del Huila in Colombia looks like it is also on the eruption watch list. A fly-over of Huila performed by Colombian officials (unclear from the article if it was done by National Emergency Management or INGEOMINAS) revealed a large lava dome growing in the crater, suggesting that an eruption might follow considering all the lava being extruded. This eruption might come in the form of an explosion caused by the collapse of this lava done – the collapse itself could generate a pyroclastic flow and the release of pressure on the underlying magma from the collapse of the dome could prompt a plinian eruption as well (but this is all speculation on my part based on the short article). This type of activity would produce a larger eruption than we’ve seen so far during the rejuvenation of Huila that started in the fall of 2007. Evacuations are being recommended for all people living near the volcano.