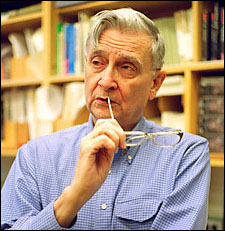 E.O. Wilson is on a noble mission to bridge the perceived divide between science, religion, and partisanship. In his book, The Creation, by framing environmental stewardship as not only a scientific matter, but also one of personal and moral duty, Wilson has engaged an Evangelical audience that might not otherwise pay attention to popular science books, or for that matter, appeals on the environment.

Shifting his focus to the partisan divide, Wilson employs a similar strategy by penning the forward to a forthcoming book by former Republican Congressman Newt Gingrich. In A Contract with the Earth, Gingrich and his co-author Terry L. Maple argue that environmental stewardship is “a mainstream value that transcends partisan politics.”

As a leading scientist and secular humanist, Wilson’s message strategy is in sharp contrast to that of the New Atheists who draw a line in the sand between the godless and the religious.

In an interview with Bill Moyers (transcript), Wilson passionately argued that if atheists and religious folk “sat down and talked about our deepest beliefs together, we’d come up with more agreements. Agreements on more things than disagreements. And then isn’t it the American way? We could say, ‘Let’s put that aside for awhile and work together when we really have something we need to work together on.’ “

Wilson said that his goal in writing The Creation was to show atheists and Evangelicals that their common values and interests far out way their differences. Moreover, for the two groups to be constantly at odds is both damaging and distracting. He calls for the godless and the deeply religious to meet at common ground “on the near side of metaphysics.”

Let us– in the service of a transcendent moral obligation and concern put aside our differences for the time being and not fuss with each other over evolution. In other words where it all came from. Let us agree looking at the evidence that is disappearing. And let us, dare I use the word, gather at the river.”

Come together on common ground where we can exercise the extraordinary power we have jointly. And I argue and few people disagreed with me that science and religion are the two most powerful social forces in the world. Having them at odds at each other all the way up to the highest levels of government and– the popular media all the time is not productive.