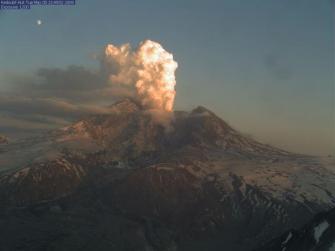 Redoubt steaming away on May 4, 2009. Image courtesy of AVO/USGS

Fairly quiet weekend (except for the start of the College World Series regionals … I do have a favored team*), volcanically speaking, but the ever-vigilant folks up in Alaska are keeping an eye on Redoubt as the eruption of 2009 continues.

The weekly status (released 5/29) for Redoubt released by AVO has no big surprises, reporting that “small discrete earthquakes and rockfall signals in the summit region have been recorded steadily over the course of the past week. In other words, the dome continues to extrude and part of it roll down the volcano. The lava dome is still growing (lots of impressive images on the AVO website), mostly extending slowly down the steep north slope of the volcano (see image below). There is still the strong possibly that the dome will catastrophically collapse causing a pyroclastic flow and potentially a plinian eruption to follow as the pressure is released, but so far, nothing of the sort has occurred. However, the dome is unstable (says Allison Payne of AVO), so a collapse might happen at any moment. Until then, most Alaskans just hope that Redoubt behaves itself during the lucrative tourist season in the state after the lost revenue from the Cook Inlet oil production.

* of course, since I wrote this, they were eliminated. Bah!

Related
Health
Could getting rid of old cells turn back the clock on aging?
More work is needed before declaring the technique a fountain of youth.
Thinking
Trimurti: Meet the “Holy Trinity” of Hinduism
Hinduism emphasizes the journey, whichever path that takes. And it holds us responsible for our own self-improvement.
The Past
Riddle solved: Why was Roman concrete so durable?
An unexpected ancient manufacturing strategy may hold the key to designing concrete that lasts for millennia.
13.8
Quantum superposition begs us to ask, “What is real?”
Quantum superposition challenges our notions of what is real.
Measuring Impact
15 research-backed benefits of employee training
The benefits of employee training are felt far and wide, from improvements in workers’ wellbeing to better customer interactions.
Up Next
Guest Thinkers
Volcano Profile: Mt. Vesuvius
The third in the Volcano Profile series finds us examining one of the most dangerous and famous volcanoes in the world: Italy’s Mt. Vesuvius.