The latest in my Volcano Profiles Series, we turn to Europe and Vesuvius. You could fill many, many volumes with the works produced on Vesuvius since Roman times. This profile will barely scratch the surface when it comes to the vast geologic and human history surrounding the volcano, but it is a start. If you want to learn more about the archaeology surrounding Vesuvius, try visiting Blogging Pompeii. 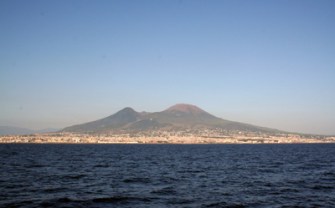 Paintng of Vesuvius (1774) by Joseph Wright of Derby.

Mt. Vesuvius erupting in 1944. It has now been 65 years since the last eruption of the volcano.

Since 1944, there have been a number of seismic events at Vesuvius, suggesting the magma system is still active under the volcano, which is definitely not surprising. The most recent of these was in 1999, when seismicity was the highest it had been in 50 years. These earthquakes were at 6-km depth under the volcano and likely reflect magma moving into the lower reaches of the system. An interesting study in 1998 suggested a connection between large earthquakes in the Appennines, ~55 km to the north of the volcano. They found that earthquakes in these mountains tended to accompany eruptions of Vesuvius, with an eruption occuring within ten years after seismicity. They conclude that there is “two-way coupling zone, within which normal-faulting events promote eruptions and eruptions promote earthquakes“, which is a fascinating localized interconnectedness of tectonics and volcanism.

Projected areas effected by ash fall and pyroclastic flows from a future eruption of Vesuvius.

The Italian government plans to evacuate 600,000 people from the area around Vesuvius if the volcano were to show signs of major activity again. An explosive eruption at Vesuvius could claim 16,000-20,000 lives without proper monitoring and mitigation. This, in itself, is an amazing number and shows the real danger posed by the volcano. The volcano was named one of the “Decade Volcanoes” as well. A commission appointed by Ministry of Defense in 1991 defined two hazard zones – a red zone where most everything would be destroyed by pyroclastic flows and a yellow zone that would be dominantly affected by ash fall (see above), lapilli and lahars. Since then, there have been many studies (pdf link) that have examined the challenge of volcanic hazard mitigation in such a densely populated area. The mitigation plan includes banning new construction in hazards, monetary bonuses for people to live outside the hazard zone, moving public offices outside the hazard zone, changes to the the transportation system to improve evacuation and an information campaign. 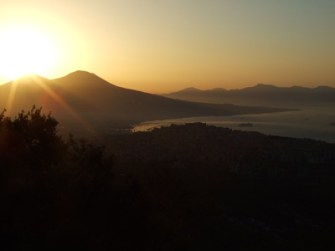