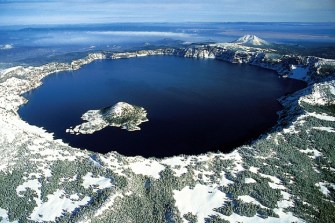 Back in a former life, I was really into radio and music. Such an existence calls for many lists of rankings: “Best albums of 2004”, “All time greatest soul singers”, “Worst album covers of the 1980s”. And, although I love a list as much as the next person, I tend to find lists appalling. Why? Well, mostly because no “Top list” of anything is accurate, and even worse, most of the time they’re put together to generate controversy. “Wait until they see I listed Wade Boggs as the best third basemen in history!” You know, that sort of thing.

Anyway, much to my surprise (chagrin?), I recently an email proudly proclaiming the Discovery Channel’s “Top 10 Volcanoes in Geologic History” (my emphasis). OK, let us stop here for a moment. “Geologic History?” Now, how are you going to go about doing that? There are many a volcano that has been wiped clean (mostly) from the geologic record that might very well have been significant, but we only have an ash bed here, an altered pyroclastic flow deposit there, so we might miss the fact that the volcano was significant.

Let us, for a moment, not get too worked up about the spatial distribution. However … Saint Helens? Grimsvotn? Santorini? Talk about cherry-picking your volcanoes. This is “geologic history” not “human history”. Saint Helens is a tiny blip that formed in the last 10,000 years for the most part. It isn’t even the most impressive Cascade volcano by a long shot, let alone “Top 10 Ever”. I think Shasta, Mazama and Rainier might take issue with the pipsqueak’s ranking.

Anyway, the point here is this list suffers from a lot of “human history” bias. Sure, these are all significant eruptions (well, minus Saint Helens again), but were is Yellowstone? Where is the Fish Canyon Tuff? Where are the multitude of giant eruptions that coat the American southwest with layers of ash? Where are any of the great Andean ignimbrites? Heck, where is Laki (if we’re talking Iceland)? This list of volcanoes from all of geologic history could go on and on and if you count extraterrestrial volcanism, well, now we’re really standing out on a limb.

So, what is missing or what should be kicked off this list?

If that list has really angried up your blood, why not wander off to MSNBC, where they have posted a handy guide to volcanism. And by handy, I mean laughably awful. How many errors or oversimplifications can you find? After this and last week’s FEMA find, you wonder why geologist exist if they don’t bother to talk to one to write these. The source for the MSNBC “guide” is AP, Reuters and the Encarta Encylopedia. They couldn’t even be bothered to get out of their seats and speak to someone who studies volcanoes and knows where the find is today. Shame on MSNBC.