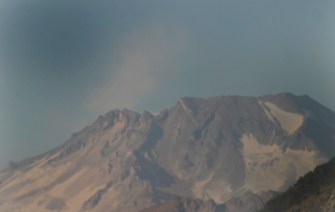 Well, if they didn’t have enough already between Llaima and Chaiten, another volcano in southern Chile has started erupting. Descabezado Grande (roughly translated: “The Big Beheaded One”) has erupted or is showing of eruption (in spanish and NOTE that the picture in the article is of Llaima, NOT, I repeat, NOT Descabezado Grande … grrr) but details are scant on the actual activity. However, scientists from the SERNAGEOMIN are headed to the area to evaluate the volcano – hopefully the reports are accurate. So far, villages and commercial air traffic near the volcano have been warned of the eruption (in spanish), suggesting an ash component as well, but that is unconfirmed. The only other report of activity from Descabezado Grande was this article (with pictures) of a 500 m / 1600 foot yellowish plume (in spanish) from the fumarole on the volcano – much larger than has been seen for years.

UPDATE 4/29/2009 10:00 AM Pacific: Well, it appears that the media got worked into a tizzy over not much. Both the SERNAGEOMIN and ONEMI in Chile has said that the observed activity at Descabezado Grande is “business as usual,” so no eruption, no increased activity, nothing. The official interpretation of the plume is “snow evaporation”. Still, it was exciting while it lasted, wasn’t it?

This area of the Chilean Andes is home to one of the largest eruptions in the last 100 years from Quizapu, a vent on the flanks of Cerro Azul. On April 10 and 11, 1932, Quizapu erupted, producing a 27-30-km / ~95,000 foot (!!) tall eruption column and ejecting almost 10 km3 of tephra, ranging from andesite to rhyolite in composition (mostly dacite). The effect of the eruption was far reaching with ash blanketing the region.

Why do I bring this up if Descabezado Grande in erupting? Well, the last time Descabezado Grande erupted was also 1932. On June 5, 1932, the volcano experienced a flank vent eruption on the NNE slope that deposited 40 meters of tephra around the vent and produced up to 8 km / 26,000 foot ash column (VEI ~3). This is the only known historic eruption of Descabezado Grande, so this new eruption could offer fascinating insight into the magmatic plumbing (a plug for some great work on Quizapu by Philipp Ruprecht at UW) underneath Descabezado Grande, Quizapu and Cerro Azul. It could also suggest that we might have activity from Cerro Azul, which last erupted in 1967 – not with the same vigor as in 1932, but still a VEI 2 eruption.