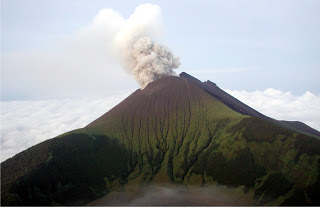 Geothermal energy is one of those sources of energy that might be able to solve a lot of the planet’s energy problems – heck, the Earth has a lot of heat it is trying to get rid of, so taking that heat and turning into energy seems like an easy (and clean?) way to stop using fossil fuels and the like. Of course, like any supposed panacea, it has its problems.

However, one aspect that gets people are riled is whether drilling into areas of active magmatism might actually cause volcanism. Just in the last few weeks, a controversy was sparked in the Philippines when 20 earthquakes were felt soon after drilling for a new geothermal prospect on Canlaon Volcano. Now, as many of you know, I love to remind people “correlation does not mean caustion” – that is, just because you had drilling and seismicity, it doesn’t mean that the two are related. In fact, the Philippine Institute of Volcanology and Seismology (PHIVOLCS) can’t even determine whether the earthquakes were volcanic, tectonic or something else – mostly thanks to the fact that their equipment was being moved at the time. However, what can be said is that little to no seismicity has been recorded at Canlaon since these tremors at the end of March even with new seismometers in place around the volcano.

Canlaon is an active volcano, in fact the most active in the central Philippines, last erupting in 2006. Most of its eruptions produce VEI 1 or 2 explosive events with minor ash and phreatic explosions, but it has erupted at least 5 times in the last decade. With a volcano this active, it wouldn’t be surprising to record seismicity, especially if an eruption might be in the works. PHIVOLCS thinks that the volcano is not headed towards eruption and that the tremors – whatever the cause – are not the result of the drillings as part of the Northern Negros Geothermal Production Field. However, some people who felt the tremors think otherwise, even suggesting a congressional inquiry into the tremors and their relation to the drilling and Canlaon. This would be a serious issue as Canloan (the volcano) is close to Canlaon City (population ~50,000). This is not a new accusation in the Philippines either, as the Aetas believed that drilling caused the 1991 eruption of Pinatubo (partial link that requires registration, sorry!), which was clearly not the case.

I would be very surprised if any human drilling possible today would have any effect on a system as large and complex as a volcano. There have been a number of research drilling programs that attempted to drill directly into the active parts of the volcano, such as the conduit at Unzen or the flanks of Kilauea/Mauna Loa. Neither of these drilling programs had any effect on the eruptive activity at the respective volcanoes. Sometimes, you do hit areas where steam can cause an explosion in the drill hole (such as the linked video in Iceland) and drilling is likely the cause of the infamous “mud volcano” in Indonesia, but these are related the water and heat rather than new movements of magma. It might be easy in one’s mind to link geothermal drilling to any increase in “restlessness” at any volcano nearby, but there is no hard evidence that drilling can have such a direct effect on volcanism.

Related
Health
Could getting rid of old cells turn back the clock on aging?
More work is needed before declaring the technique a fountain of youth.
Thinking
Trimurti: Meet the “Holy Trinity” of Hinduism
Hinduism emphasizes the journey, whichever path that takes. And it holds us responsible for our own self-improvement.
The Past
Riddle solved: Why was Roman concrete so durable?
An unexpected ancient manufacturing strategy may hold the key to designing concrete that lasts for millennia.
13.8
Quantum superposition begs us to ask, “What is real?”
Quantum superposition challenges our notions of what is real.
Measuring Impact
15 research-backed benefits of employee training
The benefits of employee training are felt far and wide, from improvements in workers’ wellbeing to better customer interactions.
Up Next
Guest Thinkers
The Decade Volcanoes
They might not truly be the “World’s Most Deadly Volcanoes”, but IAVCEI’s “Decade Volcanoes” are a list that shows just intertwined human society and volcanoes really are.