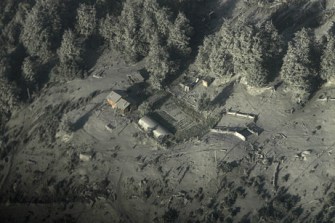 The people who remain in Chaiten face the potential for a devasting pyroclastic flow, so says Jorge Muñoz of the SERNAGEOMIN in Chile. The volcano is still producing large ash columns on Tuesday and a flyover of the dome forming inside the caldera has lead to the concern that a collapse on a larger scale than those seen last week could wipe out the town for good.

nnThe government hopes news like this from volcanologists might convince the last remaining residents of Chaiten to leave, but no indication of this has come to pass. In fact, things sound like they’re getting heated in the fight over the town of Chaiten. The Minister of Government Affairs had this to say to the lawyers for the remaining residents:n

“I think that up until now, we have been quite convincing, but to say that the problem is to unblock the river (…) Why don’t we back up a bit? Why is the river overflowing? Because the volcano is exploding, that’s why!”

nIt gets even uglier here from the Undersecretary of the Interior. It seems that both sides are digging in the heels, so to speak.