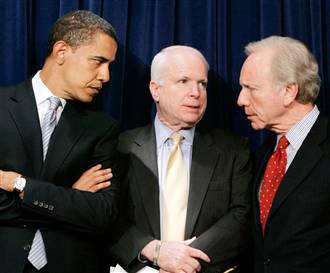 Earlier this week I spotlighted the unheard of 20-30 point shift since February in how Americans view what should be done about the energy problem, with as many liberals now as conservatives favoring energy exploration and investment in nuclear power over conservation efforts and regulation. As I noted, given this quickly changing interpretative landscape, it’s not surprising that the first GOP-funded television spot of the presidential campaign touted McCain’s “balanced” approach on energy and his willingness to “stand up” to his own party on the issue.

Now, in the latest report from Democratic strategist James Carville and pollster Stan Greenberg, the two veteran campaign consultants raise alarm that Obama is not responding to these public opinion shifts with an effective narrative on energy and that McCain is way out in front when it comes to a compelling policy and message.

Their recent polling is consistent with the findings from Pew I drew attention to earlier this week. As Carville and Greenberg report, by a 16-point margin voters place more importance on reducing gas prices than addressing energy conservation and global warming, and in order to achieve this goal a majority of voters believe that coupling an investment in alternative fuels with increased domestic production of oil is preferable to alternative fuel investment combined with energy conservation alone.

When it comes to which candidate comes out on top in this opinion environment, here’s what they reluctantly describe:

John McCain enters the offshore drilling debate with voters’ favor. Six-in-ten voters favor McCain’s proposal to drill in some U.S. coastal regions to help lower the price of gas. McCain’s proposal is overwhelmingly favored by independents and Republicans (69 and 86 percent, respectively) and even gathers support among more than one third of the Democratic electorate. More importantly, McCain’s message adding domestic oil production to a policy of alternative energy investment and conservation is favored over Obama’s message that blames oil companies, calls for investments in alternative energy and rejects limited offshore drilling.

As a response, Carville and Greenberg urge that Obama offer “a sharper attack on what McCain is really offering and a bigger offer for the short term and long.” Specifically, Obama should emphasize in policy and message:

* Relief now from high prices with energy tax credits to offset prices and encourage weatherization for this winter.

* Require oil companies to drill now on their existing leases.

* Change in the way we make cars to create a significant rise in fuel efficiency – something opposed by McCain.

* Finally, have an energy policy for America, not the oil companies.