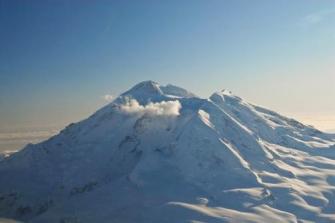 I’ve been following the waxing and waning of activity at Mt. Redoubt in Alaska for the past two months like many of you have. For a time there, the volcano had the nation’s attention, both from the threat of a eruption near major shipping and oil hubs and from some questionable comments made by a certain Republican governor. However, nature sometimes doesn’t play well with others, so after weeks of the Alaska Volcano Observatory’s warnings that the volcano could erupt in “days to weeks”, Redoubt seems to have returned to a state of calm. In fact, AVO reduced the alert level from Orange/Watch to Yellow/Advisory. They summarize the downgrade in the following statement released yesterday – part of an excellent summary of the current state of Redoubt, a history of the unrest and the potential future activity (a must read for anyone interested in Redoubt):

decreased, and the periods of sustained volcanic tremor, common during

late January and most of February, have been largely absent. Discrete

earthquakes are still occurring, but they are typically small and

of unrest. Volcanic gas emissions are still well above background

levels, and melting of the upper Drift glacier in the vicinity of the

1989-90 eruption vent is continuing. These conditions could persist

for many months and do not indicate that an eruption is imminent.

If we pick that apart, we can see a few things. The seismicity, which tend to be correlated with magma moving in the system, has ceased. However, volcano gas (carbon dioxide, sulfur dioxide, water amongst others) emissions are still elevated and melting continues near the 1989-90 dome. This means that the magma that intruded over the last few months – the magma that appears to have stopped moving – is still close enough to the vent to impart its heat and gases to rocks at that level. How close is that? The scientists at AVO think the magma is probably no shallower than 2 km, mostly likely as deep at 5 km, below the volcano. Why the magma stalled is anyone’s guess, but this mass of magma rose for a time then stopped, and that is what drove the seismicity, degassing and melting we all saw since January. The consequence of this for future eruptions could be (1) nothing – most likely; (2) the slowed/stopped magma could “plug” the conduit, resulting in an increased in pressure of new magma that might produce a more explosive future eruption – less likely.

The thing that might be the most problematic with this period of unrest at Redoubt is what the fact that the volcano didn’t erupt will mean to the public reaction that next time it starts to act up. AVO reputation is solid enough that I don’t think the citizens of Alaska will not heed their future warnings (as has happened in other situations, such as at Nevado del Ruiz in Colombia), but there will be the chance that the media might make it a point that Redoubt did not erupt the last time it was “acting up.”

This is the crux of the problem with mitigating disasters that we can’t adequately predict just yet – how do you convince people that you know what you are doing. AVO did an excellent job in providing people with information and updates on the volcano, were very transparent in their evaluation and even so, Redoubt decided that it was going to throw us all for a loop (unlike Mt. Saint Helens in 2004). Does this mean that we volcanologists don’t know what we’re doing? Heck no. It is just that with a complex system like a volcano, we don’t have nearly enough understanding of what triggers eruptions, what are definite signs of eruption and exactly when an eruption will occur. We may never reach that point, but to ever apply the “Boy who cried Wolf” analogy to volcanic monitoring is asking for a major disaster. AVO ends the update by warning that “It remains possible for conditions at the volcano to change rapidly, advancing from relatively low levels of unrest to eruption in time periods as short as 24 hours.” We should take this to heart: as much as we don’t like to admit it, nature still holds all the cards.

Related
Health
Could getting rid of old cells turn back the clock on aging?
More work is needed before declaring the technique a fountain of youth.
Thinking
Trimurti: Meet the “Holy Trinity” of Hinduism
Hinduism emphasizes the journey, whichever path that takes. And it holds us responsible for our own self-improvement.
The Past
Riddle solved: Why was Roman concrete so durable?
An unexpected ancient manufacturing strategy may hold the key to designing concrete that lasts for millennia.
13.8
Quantum superposition begs us to ask, “What is real?”
Quantum superposition challenges our notions of what is real.
Measuring Impact
15 research-backed benefits of employee training
The benefits of employee training are felt far and wide, from improvements in workers’ wellbeing to better customer interactions.
Up Next
Guest Thinkers
Welcome to Eruptions
Welcome to version 2.0 of Eruptions, the blog on volcanic eruptions and volcano research in general. I’ve been writing this blog (starting over on WordPress) over the last year or […]