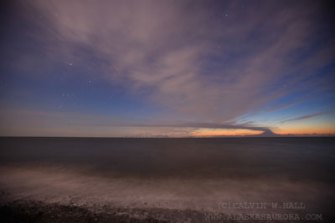 It has been a while since we spoke of Redoubt, but now it seems the reason why might be that the eruption is ending. AVO lowered the Alert Level at Redoubt to Yellow from Orange, indicating that they believe the volcano is less likely to have a large eruption. This doesn’t mean that it is out of the question, but rather that signs seem to be pointing to the idea that the eruption is waning.

Seismic, satellite, gas, and deformation observations over the past few weeks indicate that growth of the lava dome at Redoubt has significantly slowed, if not stopped, and therefore it is possible that the current eruptive activity has ended. However, it is unknown if this represents the end of the 2009 eruption of Redoubt or if the activity has only paused temporarily and might resume in the next months.

We can expect the dome to continuing steaming for some time even if the dome has fully stopped growing – the rock underneath the dome will stay hot – and you can still check that out on the webcams. It did take a while before CVO officially ended the 2004-2008 eruption of Mt. Saint Helens, so don’t look for AVO to put an “official” end to this eruption for a while. Of course, the last time they tried this, Redoubt came back with a vengeance, so it will still be closely watched, but for now, it sounds like the volcano is taking the early summer off.

Related
Health
Could getting rid of old cells turn back the clock on aging?
More work is needed before declaring the technique a fountain of youth.
Thinking
Trimurti: Meet the “Holy Trinity” of Hinduism
Hinduism emphasizes the journey, whichever path that takes. And it holds us responsible for our own self-improvement.
The Past
Riddle solved: Why was Roman concrete so durable?
An unexpected ancient manufacturing strategy may hold the key to designing concrete that lasts for millennia.
13.8
Quantum superposition begs us to ask, “What is real?”
Quantum superposition challenges our notions of what is real.
Measuring Impact
15 research-backed benefits of employee training
The benefits of employee training are felt far and wide, from improvements in workers’ wellbeing to better customer interactions.
Up Next
Guest Thinkers
Send me your volcano questions
Got a volcano questions that’s been bugging you? Send it my way for the Eruptions Mailbag.