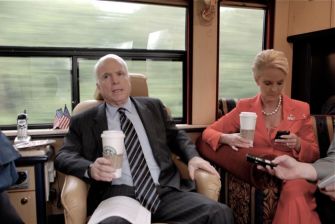 “Grandpa” McCain?: The presidential hopeful relies on his wife and aides to show him things online or to read him email messages.

As I’ve written, McCain’s admission that he doesn’t know how to use the Internet or a computer has helped feed the Obama campaign’s narrative that the GOP candidate is out of touch with average Americans. It’s a framing strategy that you can bet McCain’s campaign advisers are more than sensitive about.

Today, the Associated Press reports that one such adviser has gone so far as to present McCain as a creator of the BlackBerry. From the AP:

MIAMI (AP) — Move over, Al Gore. You may lay claim to the Internet, but John McCain helped create the BlackBerry. At least that’s the contention of a top McCain policy adviser, Douglas Holtz-Eakin. Waving his BlackBerry personal digital assistant and citing McCain’s work as a senator, he told reporters Tuesday, “You’re looking at the miracle that John McCain helped create.”

A McCain aide later dismissed the remark as “a boneheaded joke by a staffer.”

As Major Garrett at FoxNews observes, this one has the potential to be a major campaign gaffe, a mistake that the Obama team has already re-interpreted as part of their master narrative about McCain. In an email sent by way of BlackBerry, an Obama staffer quickly noted: “If John McCain hadn’t said that ‘the fundamentals of our economy are strong’ on the day of one of our nation’s worst financial crises, the claim that he invented the BlackBerry would have been the most preposterous thing said all week.”

So what is it about conservatives and an absence of computer or Internet curiosity? While McCain admits that he doesn’t use the Web or email, President Bush has infamously referred to the “internets” and that he “uses the Google.”

In contrast, the Pew survey organization reports that about three-quarters of white, college-educated men 65 or over use the Internet, putting McCain and Bush among the technology laggards for their demographic group.

And just this Sunday, on ABC’s This Week, columnist George Will admitted that he similarly has little understanding of email or the Internet. In responding to whether or not the age issue will hurt McCain, Will said:

GEORGE WILL: I’m four years, eight months and five days younger than him.

GEORGE WILL: But who’s counting, yes. And I am really not good at email and that stuff. That’s why god made Georgetown interns to work in my office. I think this – I don’t think this will have much traction with people. I just don’t believe that John McCain looks like someone who is not up to speed.

Hmmm. George Will could probably benefit from being able to access Pew survey data online instead of relying on his Georgetown interns. 😉

Related
Health
Could getting rid of old cells turn back the clock on aging?
More work is needed before declaring the technique a fountain of youth.
Thinking
Trimurti: Meet the “Holy Trinity” of Hinduism
Hinduism emphasizes the journey, whichever path that takes. And it holds us responsible for our own self-improvement.
The Past
Riddle solved: Why was Roman concrete so durable?
An unexpected ancient manufacturing strategy may hold the key to designing concrete that lasts for millennia.
13.8
Quantum superposition begs us to ask, “What is real?”
Quantum superposition challenges our notions of what is real.
Measuring Impact
15 research-backed benefits of employee training
The benefits of employee training are felt far and wide, from improvements in workers’ wellbeing to better customer interactions.
Up Next
Guest Thinkers
Two Essays on Expelled, Dawkins, and PZ
Two essays I wrote on Expelled are now in print and I have placed PDFs of the articles online. The first shorter essay appears at Skeptical Inquirer magazine and reviews […]