Skip to content
Who's in the Video
Mary Roach
Mary Roach grew up in a small house in Etna, New Hampshire. She graduated from Wesleyan in 1981, and then moved out to San Francisco. She spent a few years[…]
Go to Profile
Videos
Bionic Ear Cuffs Could Stop Soldier Hearing Loss, Save VA Hospitals $1 Billion
Mary Roach, author of Grunt: The Curious Science of Humans in War, talks about ear cuffs, a new military-grade technology that will help soldiers preserve their hearing and minimize deafness and hearing disability among veterans.
▸
3 min
—
with
Mary Roach

As Mary Roach, author of Grunt: The Curious Science of Humans in War states, the noise isn’t the biggest problem in the military, but the sudden volume change can be. If a person was to go in a helicopter, with the engine right under their ears and propellers going crazy right above, it’s easy to know that they’ll need some ear plugs to protect their hearing. It’s an obvious choice to make. In the military, it’s not so easy. A soldier may need to talk to the person sitting next to them in the helicopter. A conversation may be important.

Or they could be strolling on the ground. An improvised explosive device, or IED, can be activated, and the once-quiet situation they were in is now booming loud. Their hearing is at risk.

It is the military’s job to protect their soldiers, and the situation above has happened more often than enough for them to come up with a solution, or at the least try to. The needs are hard to cover – the military has to come up with a way to both protect hearing from loud noises, and allow soldiers to talk to each other with ease. A big problem while designing such equipment is having to deal with these sudden changes. Ear damage has two major factors: the dB level, and the exposure time. An extremely noisy street doesn’t present immediate damage, but if a person is staying there all day, this could lead to some problems. Then there are the IEDs, the sudden bursts of loud sound where just a short burst can lead to long-term hearing loss.

The military has some success with these designs – and it would want to, as it costs the US Department of Veteran Affairs $1 billion annually to provide care for hearing loss and disability. The new designs are called ear cuffs, and are used by special ops teams. Developers have designed the head gear to hear (and even amplify) quiet noise, such as a conversation or vital information passing between two soldiers, to easily be heard among the group, while anything too loud is muffled down. These ear cuffs may reach the civilian market soon, as many military-intentioned products do. It would be nice if instead of military-grade weaponry charging the streets, a set of protective headwear became available. Until then, a high-quality pair of headphones will have to do.

Mary Roach’s book on this topic and others is Grunt: The Curious Science of Humans at War. 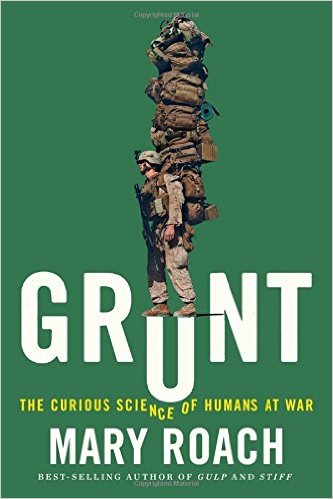 Mary Roach:  With a really loud noise like an M-16 is 160 dB and something that loud just a second or two or a split second worth of exposure can cause some hearing damage. Whereas if you're talking about like a noisy street, a loud restaurant, 85 dB, you could be exposed for eight hours before you'd start to run a risk. So it's a combination of how loud it is and how long you're exposed. So it's a huge problem in the military. It's the number one expense that the VA deals with. It's a billion dollars a year for hearing loss and tinnitus for hearing disabilities.

And you think well, duh, put in earplugs or ear cuffs. And that's great until you need to communicate; you need to hear somebody yelling get down or there's someone over there. These are pretty important things to hear and so the idea is that you want to be able to protect hearing but also preserve what they call situational awareness, like what's going on around you. Because about 50 percent of that comes from hearing, even somebody riding a bike down the street so a lot of it is you're aware of things by sound, even if you don't realize that.

So the military's challenge has been to come up with a way to protect hearing but also enable you to hear more quiet places. In special operations they have something that they're using, which is really cool. It's these ear cuffs that magically, not magically it's technology, but they attenuate loud noise, they minimize loud noises. They sense something that's over a certain decibel level, cut that but amplify quiet noises like a human voice. So you put these on and when they're switched on it's kind of amazing you're kind of like the Bionic Woman; you're able to hear a conversation across to the street. So that's the challenge of military hearing.

The other thing that's tough is that when a really loud noise starts happening there's no warning. So you could be going along for hours in a convoy and there's not any fire fight or anything going on, but suddenly an IED goes off so you don't have any warning to put on or in your ear protection. So that's the other challenge and it's hard to convince a soldier to wear a heavy headset the entire eight hours that they're driving somewhere. Somebody put it as the military doesn't have a noise problem, they have a quiet problem because a lot of time it's not loud but suddenly it's loud and you don't have the time and now your hearing is blown.

Like so many military technologies it's something that may start out with a specific military application but it finds its way to the civilian world. And I actually want a pair just to put on in the subway and ease drop to the other end of the car. When I was young there was a show, The Bionic Woman, and I'm dating how ancient I am, but one of the things she was in a tragic accident and she was rebuilt and they gave her bionic hearing. And you'd see her kind of go like beep, beep, beep and then she would be able to hear conversation like the bad guy across the street having a conversation. This is what these things do. It's pretty spectacular.

Up Next
Hey Bill Nye! Is Playing the Lottery Rational?
▸
4 min
—
with
Bill Nye, The Science Guy
Related
3 steps to cure your money anxiety
We’re afraid to talk about money–and that costs us.
▸
7 min
—
with
Kathleen Burns Kingsbury
The Well
Tyler Cowen: America is at a critical point in history
“There’s a sense of crisis today that we did not have in the 1980’s or 90’s” — economist Tyler Cowen on progress in America.
▸
5 min
—
with
Tyler Cowen
How dirty debaters win against better opponents
How to defeat debaters who deal in distractions, according to a two-time world debate champion.
▸
5 min
—
with
Bo Seo
The mind-blowing stats on male inequality
Male inequality — the enormous cultural shift happening right under our nose.
▸
15 min
—
with
Richard Reeves
The Well
How Earth’s axis and rotation created human ritual
Why do so many cultures celebrate holidays at the same time of year?
▸
4 min
—
with
Sasha Sagan