Skip to content
Who's in the Video
Janna Levin
Janna Levin is a professor of physics and astronomy at Barnard College of Columbia University. She is also director of sciences at Pioneer Works, a center for arts and sciences[…]
Go to Profile
Videos
How Gravitational Waves Created by Black Holes Prove Albert Einstein Right
Albert Einstein was the first to discuss the fabric of space, and according to his theorems, the curvature of it. We have been discussing the possibility of gravitational waves ever since.
▸
7 min
—
with
Janna Levin

Albert Einstein was the first to discuss the fabric of space, and according to his theorems, the curvature of it. We have been discussing gravitational waves ever since. Einstein e claimed that with a planet orbiting on the fabric of space, it would act like the surface of a trampoline, sending out waves and ripples in reaction to the planet’s pressure.

The ripples spanning out through space are gravitational waves, and as these gravitational waves pass by, like birds on the ocean surface bouncing up and down, every object they pass will compress and stretch along with these waves. This includes our planet, stretching and compressing with the waves that hit us.

As gravitational waves behave similar to frequencies, they are perhaps more like sound than a physical phenomenon. The LIGO (Laser Interferometer Gravitational-Wave Observatory) instrument, designed specifically to detect the extremely weak signals of gravity, can measure these waves. With some work, we can translate them to sound, allowing us to actually hear the gravity of the universe.

Levin’s newest book is Black Hole Blues and Other Songs from Outer Space: 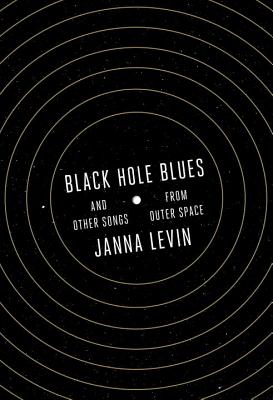 Despite all these waves, and the force of the Earth’s gravity pulling us down, gravity is a very weak force. So LIGO must be extremely sensitive in order to record these waves. But because it’s so sensitive, and only responds to gravity, it can search out places science hasn’t been able to get to, lacking strong enough telescopes and other appropriate equipment. Gravity isn’t blocked out by light, or cut off by interrupting planets; it keeps going in ways telescopes can’t.

By using LIGO, scientists were able to record two black holes as they came together, one that was twenty-nine times the size of our sun, the other thirty-six. They hit together, becoming a single black hole over sixty times the size of our sun. We know about this because of LIGO, and this is the first time we have information brought to us that wasn’t seen. This is a brand new way to look at the universe — by the form of its gravity waves.

Janna Levin:  Gravitational waves are such a difficult concept. When Einstein first wrote down his theory of curved space time he said the most important question that he needed to look at next was the question of whether or not there were waves in the shape of space-time. If space-time can curve, so let's say you imagine around the earth or around a black hole there are these deep curves and those are the paths that you naturally fall along if you're falling around a black hole or the earth or the sun or anything else. That traces out the shape of space-time. But if I take it that black hole and I start to move it around those curves in the shape of space have to follow the moving black hole. They have to somehow readjust, straighten out in some places and curve in other places. And those are the gravitational waves. And they actually move like a wave in space and time. If you were floating nearby you would kind of bob on the wave. You would be slightly squeezed and stretched as it passed. And in Einstein's approach to gravity we think that the gravitational waves travel at the speed of light so they emanate out through the universe kind of as though fish were swirling in a pond and of the pond started to create waterways and those would emanate out through the ocean.

When black holes collide they're like mallets on a drum and space time itself rings. And if we could hear that sound, which you might be able to actually technically if you were an astronaut floating near enough to colliding black holes, you might actually have your eardrum resonate in response and hear something. And it would sound, the word that we use is a chirp, it sounds like a chirp. And what that really means is the ringing of space sweeps up in frequency as the black holes get faster and faster and finally merge. So they're going to near the speed of light by the time it's loud enough to be heard.

A gravitational wave is much closer to a sound than just some kind of scientific analogy. You can take a lot of different wave forms and translate them into sound, it doesn't really mean that they're actually sounds. But a gravitational wave you could liken it to how an electric guitar, when you pluck of the string of an electric guitar it doesn't technically make a sound. It vibrates and the body of the guitar translates that vibration into a sound. In some sense LIGO, the instrument that measured the gravitational wave, it's doing something like that. The gravitational wave is a ringing of space time, a vibration of space time and the machine records the vibration and plays it back as sound. You can actually sit in the control room at the two sites of the LIGO observatories and listen to the detector.

It's surprising to people I think to know that gravity is actually very weak. We think that gravity is this incredibly strong force. We feel heavy in our chairs, we feel heavy when we lie in bed at night and we think that gravity is this thing we resist, but it's actually incredibly weak. The whole earth is pulling on me and I can still jump. And so by the time the gravitational waves get to the earth the phenomenon is so small that the experiment has to be incredibly sensitive to detect this ringing of space-time. Presumably right now the room is flooded with the gravitational waves coming from incredibly far away but they're just imperceptibly weak by the time that they get here. So what the instrument has to do is it has to record over four kilometers variations in the shape of space-time of less than 1/10000th the width of a proton. Another way to try to have a sense of that scale is to make the comparison that it's equivalent to trying to measure the width of a human hair compared to 100 billion times the circumference of the world.

The LIGO accomplishment is huge on many levels, but it shouldn't be lost on us that this is one of the only times we've recorded something from space that wasn't brought to us by light. So when we look out into the cosmos everything we see is shining in one way or another, whether it's in x-rays and gamma rays or whether it's in ultraviolet or infrared light or visible light, it's really the messenger that we've relied on to construct what I think of as kind of a silent movie of the history of the universe. The further away we look in space the longer ago that message started its journey to us. So we're looking deep into time and into space.

This is the first time we're recording something like this that isn't light, it's really like the soundtrack to the universe. And we know the universe is dark, predominantly that less than five percent of what's out there can shine or reflect light, that most of the universe is in a form of matter called dark matter or a form of energy called dark energy. Now maybe these things don't create gravitational waves, but maybe they do. We haven't thought about it hard enough. And so this is not only an opportunity to kind of turn on the soundtrack to colliding stars, exploding stars, the Big Bang, but it might also be an opportunity to listen for dark phenomenon we've really never been able to detect any other way.

Up Next
Has Apple Lost Its Simplicity without Steve Jobs?
▸
7 min
—
with
Ken Segall
Related
3 steps to cure your money anxiety
We’re afraid to talk about money–and that costs us.
▸
7 min
—
with
Kathleen Burns Kingsbury
The Well
Tyler Cowen: America is at a critical point in history
“There’s a sense of crisis today that we did not have in the 1980’s or 90’s” — economist Tyler Cowen on progress in America.
▸
5 min
—
with
Tyler Cowen
How dirty debaters win against better opponents
How to defeat debaters who deal in distractions, according to a two-time world debate champion.
▸
5 min
—
with
Bo Seo
The mind-blowing stats on male inequality
Male inequality — the enormous cultural shift happening right under our nose.
▸
15 min
—
with
Richard Reeves
The Well
How Earth’s axis and rotation created human ritual
Why do so many cultures celebrate holidays at the same time of year?
▸
4 min
—
with
Sasha Sagan