Skip to content
Who's in the Video
Derek Beres
Derek Beres is a multi-faceted author and media expert based in Los Angeles. He is the Head of Content Marketing and Community at Centered and co-host of Conspirituality. You can[…]
Go to Profile
Thinking
Jordan Peterson’s take on the origins of the Buddha
In this short video, he compares the outset of Buddhism with the biblical garden.
▸
with
Derek Beres

Jordan Peterson begins at the outset of the origin myth. Siddhārtha Gautama’s father was a local oligarch in the region of modern-day Nepal. It was prophesied that his child would either become a great political king or spiritual leader. The chieftain would never have a mendicant for a son, and thus built a walled garden to enclose his offspring. This way the young Gautama would only experience the pleasures of life: health, youth, and beauty.

Father purposefully kept son from disease and death, hoping that by showing the future Buddha joy and mirth he would never feel the need to wander around sampling spiritual disciplines, meditating, chanting, and the like. Peterson finds this predictable:

“It’s also in some sense what a good father would do. What do you do with your young children? Well, you don’t expose them to death and decay at every step of the way. You build a protected world for them, like a walled enclosure, and you only keep what’s healthy and life-giving inside of it.”

You wouldn’t bring a three-year-old to a funeral or show a four-year-old The Texas Chainsaw Massacre, Peterson continues. Because the Buddha has been raised in good health, however, he seeks what’s beyond the protective confines of that which has blessed him with health. He becomes, like all humans, curious.

Peterson compares this moment with a realization from Doestoevsky’s Notes From the Underground: give people utopia and the first thing they want to do is smash it to pieces “just so something interesting and perverse can happen.” Peterson continues,

“We’re creatures that are designed to encounter the unknown. We want to keep moving beyond what we have, even if what we have is what we want. And maybe that’s partly because we’re oriented towards the future.” 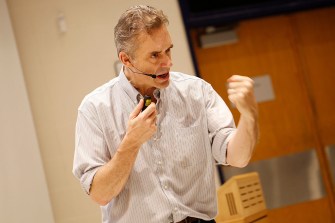 Buddha might have felt confined by a few walls; today, Earth itself seems too restrictive. Jeff Bezos calls us, in honor of Isaac Asimov, “planetary chauvinists,” while Elon Musk declares we must become a “multi-planetary species.” Most likely, a mature Buddha would recommend they both curb their interplanetary enthusiasm and take better care of the planet that birthed us. Still, a young Gautama felt stuffy in his pleasure dome.

Peterson compares what happens next to modern-day China’s Olympics preparation, spray painting grass green and evicting locals to offer an appearance of sterility. Gautama Sr. attempted to make the outside world as safe as his son’s walled garden. He tells the sick and ugly to take a walk. Peterson calls it the snake in the garden theory:

“No matter how much care you take to make things perfect, some of what you’re excluding is going to come back in.”

A chosen route was strewn with flowers; beautiful women lined the road for young Gautama’s chaperoned chariot. But then, as always, the gods intervened. Though Peterson doesn’t mention it, they create an alternate — or in this case, real — route for the Buddha to travel that only the prince and his driver see. And what he saw was old age, disease, and death. That is, he learned about time.

Gautama returns home distressed, though awakened to the nature of reality — in this case, nature. He has finally felt the pain of sentience. Peterson mentions that he’s comforted in the safety of his walled garden, again protected by caretakers who use hugging as an analgesic. Pain reduced, Gautama eventually fixes for his vice. Forget these golden robes, he thinks, I must understand pain and suffering. Peterson notes the parallel with the biblical garden, the onset of consciousness after the tempting fruit is bitten.

In Peterson’s retelling, the Buddha needed six months before venturing out again. In other versions, he sees all the world’s ailments in a single night. Either way, Gautama could never really return to the walled garden. As with all epics, he had set out on his quest; there was no turning back. His father would have a mendicant for a son, one who would, in a strange twist, become a sort of political leader, though that’s rarely discussed.

Interestingly, Peterson never mentions the fact that Buddha himself becomes a deadbeat dad, leaving his family shortly after the birth of his son, Rāhula, who he named for being a “fetter.” Buddha felt his son chained him to a life he no longer wanted to live. Just as his father created his neurosis, we have to wonder what became of Rāhula’s psychological trauma.

Continuing alongside biblical parallelism, Peterson notes that the Bible is set up in the same manner as the Buddhist cycles: a garden, the collapse of ignorance, the journey, a return home — all four of Joseph Campbell’s phases of mythology covered.

The question has now been asked: How to bring order out of chaos? The very problem civilizations repeatedly pursue. In biblical and Buddhist times, it centered on tribal conflicts; today, how to leave a planet we’re quickly destroying — though we’re certainly still consumed by our tribal battles as well. Millennia change little.

For Peterson, it begins and ends here: “Identification with the spirit that generates order out of chaos.”

What does that spirit contain? That is still a question being asked, likely one that will be asked until we are no more. The Buddha offered his response in the form of the Four Noble Truths and the Noble Eightfold Path that followed. What must change is not external realities, most of which we have little to no control over. What must change is your mindset.

Origin myths are telling as they reveal the path ahead. The story of Buddhism is rooted in a tale many of us live through: the mythos of overprotective parenting. While curiosity is part of our biological inheritance, the ability to cultivate stillness and practice composure is every situation leads to liberation. A timeless message, regardless of external circumstance.

Up Next
The science of expansion: Andromeda, gravity, and the ‘Big Rip’
▸
4 min
—
with
Michelle Thaller
Related
The Learning Curve
No pain, no gain? Science debunks yet another exercise myth
You don’t have to “feel the burn” to see improvements to your health and well-being.
Sponsored
If we live in a capitalist world, why is it taboo to talk about money?
The “money taboo” is not a single taboo, but rather an amalgamation of several smaller taboos tied to gender and socioeconomic class.
Neuropsych
Need to find your focus? Take some time to lose it.
When you can't enter flow, you can still lean on your internal rhythm.
3 steps to cure your money anxiety
We’re afraid to talk about money–and that costs us.
▸
7 min
—
with
Kathleen Burns Kingsbury
How dirty debaters win against better opponents
How to defeat debaters who deal in distractions, according to a two-time world debate champion.
▸
5 min
—
with
Bo Seo